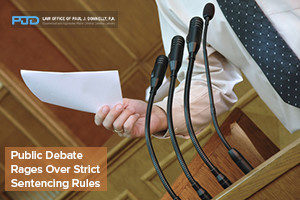 For decades debate has raged over how much flexibility should exist in criminal sentencing. Some argued that strict sentencing guidelines are necessary, while others counsel for flexible rules that permit judges to determine sentences based primarily on the facts of the case at hand.

In fact, a pending U.S. Supreme Court case about Florida’s limit on which convicted felons are eligible for the death penalty brings this issue to the fore. This case is important for Miami residents interested in criminal law issues.

The Florida Case at the U.S. Supreme Court

The Florida case involves the question of how the I.Q. of convicted defendants should play into their sentencing. Currently, the state has a rigid rule regarding the I.Q. minimum for convicts to be allowed to be sent to death row.

The current minimum is at 70 points. If an inmate is determined to have above a 70 I.Q., then he is deemed intellectually capable to have the intent to have understood the crime he committed, and therefore, eligible for the death penalty.

In the current case before the U.S. Supreme Court, some are suggesting that Florida may want to consider additional factors rather than rely solely on the I.Q. figure.

Alternatively, some of the other justices have indicated that Florida should be able to decide what its criteria for sentencing its own convicts without any additional factors to determine who is “mentally retarded” and ineligible for the death penalty under U.S. Supreme Court precedent.

In the current matter, the defendant was convicted of the 1978 murder of a 21 year old pregnant woman and sentenced to death.

The defendant’s attorney claims that the problem with using one I.Q. test, without and other factors, is that the I.Q. test has a certain margin of error. He argues that Florida should have considered the margin of error in I.Q. tests when determining sentencing.

Alternatively, the Florida Attorney General argued that adding flexible sentencing guidelines would only slow down trials and likely add individuals as mentally disabled who do not deserve to avoid the death penalty.

The argument between the convict and the State of Florida is about two legal theories on how to structure penalties in the judicial system.

On the one hand is the argument that strict bright-line rules create predictable sentencing that is applied evenly in all situations.

Also, proponents of this type of rule argue that it is more appropriate for legislatures to determine sentencing guidelines in advance with little, or even no, input from judges.

Instead, they believe that it is better to give judges more flexibility in determining sentencing for each defendant.
Related Posts:

For more guidance about the many issues involved in criminal sentencing or criminal law in general, Call Law Offices of Paul J. Donnelly, P.A. at 305-757-3331.