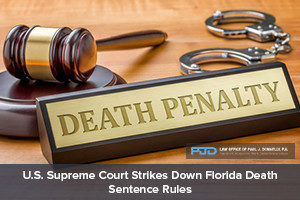 The United States Supreme Court recently struck down Florida criminal law requirements regarding a defendant’s eligibility to be sentenced to death. Florida, as well as several other states, have a legal requirement that defendants have a certain level of IQ in order to be eligible for the death penalty.

In Florida, convicted felons from Miami or anywhere else in the state who face sentences that may include the death penalty must have their IQ tested. Under the recently rejected law, if the convict’s IQ falls at or below 70, the defendant is considered to be mentally disabled. If the defendant is mentally disabled, then the state cannot use the death penalty.

Why Have a Minimum IQ?

Under the cruel and unusual punishment standard, it has become improper to sentence children or mentally disabled individuals to death. From a policy perspective this would seem to make sense. Many criminal laws are designed to accomplish one of two things:

When it comes to mentally disabled defendants, neither retribution or deterrence can occur since the defendant may not understand what they did and why it was wrong.

What is Wrong with Florida’s Standard?

The Court found that IQ tests are not entirely accurate all the time. For example, a defendant who scored a 75 one day on an IQ test may in fact be mentally disabled, but simply scored well that day. Because of this, the Court has ordered Florida, as well as the other states that use an IQ of 70 as their benchmark, to consider additional facts in determining whether a defendant is mentally disabled or not when the defendant’s score is between 70 and 75.

Florida will likely be able to adopt new requirements into its sentencing policies without new legislation. The current policies allow courts to use multiple factors in determining a sentence, but the primary and controlling factor in death penalty cases had become the IQ test.

Courts, prosecutors, and defense attorneys will simply have to adjust their normal practice to add other factors into the analysis of a defendant’s mental acuity, outside of the IQ test.