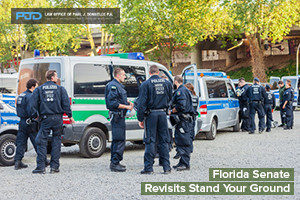 The Florida State Senate criminal justice committee has passed a bill that would revise the controversial “Stand Your Ground” law.

The committee quickly passed the bill with bipartisan support, meaning at least some Democrats and Republicans agreed with the measure.

The bill would make several changes to the law. Many of the changes were recommended in Governor Rick Scott’s safety task force findings in 2012 following the national attention the Trayvon Martin shooting invoked.

The changes to the Stand Your Ground law may have profound changes to criminal law across all of Florida, particularly in larger cities such as Miami.

The bill, numbered SB130, is designed to clarify the original law. Legislators who support the “Stand Your Ground” law have argued that it was not designed to protect someone like George Zimmerman, who was the initial aggressor in the conflict with Trayvon Martin, which of course led to Mr. Martin’s death.

The new bill would clarify several points of the original law.

First, the bill would require that law enforcement must investigate whether a person claiming self-defense had lawfully used force. Second, the bill would permit lawsuits by third parties (people who were neither the victim nor the aggressor) who are injured by negligent conduct used in self-defense.

Third, the proposed law would require Florida’s Department of Law Enforcement to create training programs for neighborhood watch members that local law enforcement agencies would provide in their communities.

Finally, the bill would clearly state that neighborhood watch volunteers would not have the right to confront individuals or to engage in vigilantism.

According to the bill, neighborhood watch training would have to serve several important purposes. The training would explain how to recognize and report suspicious activity as well as passing on general crime prevention techniques to volunteers.

The program would also instruct volunteers regarding the limits on when a neighborhood watch member can assist another person.

Why Was “Stand Your Ground” Considered Necessary?

“Stand Your Ground” laws were originally intended to provide legal support to individuals who were assaulted. Under traditional rules, a person being attacked generally was required to retreat as far as possible from an attacker to avoid a fight.

This policy was designed to minimize the number of fights, but it struck many as impractical and unfair to victims. Rather than being required to try to retreat, “Stand Your Ground” implies that a potential victim of an attack could stand in place and fight back with appropriate force to protect himself.

“Stand Your Ground” gives immunity to those who believed they are in danger of bodily harm. Immunity means that a person is “immune” from prosecution and any charges brought against them must be dismissed.

If you find yourself to be the victim of an assault or battery or believe that you justifiably used force against an attacker and now face charges in court, contact top criminal defense attorney Miami at the Law Office of Paul J. Donnelly in Miami. Call us today at (305) 757-3331 for a no-obligation consultation regarding your case.