Continued Fallout from the LIBOR Manipulation 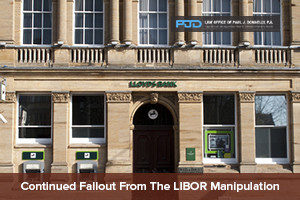 In recent years, a financial scandal came to light regarding the London Interbank Offered Rate, or “LIBOR.” And most recently, a British firm became the latest in a line of financial institutions culpable in the manipulation of the LIBOR interest rate, to their benefit and against the law.

The LIBOR interest rate is a benchmark for all short term interest rates, and is set by the “big banks” that are members of the British Bankers’ Association as a rate for banks to borrow funds that reflects market conditions.

These banks submit a figure representing the rate they pay for borrowing from other bank, which itself demonstrates the health of the global financial system because high interest rates will generally mean credit is tighter and confidence in the system is lower, while lower rates mean credit is more available and thus confidence in the system is higher since people will be more likely to take on debt and therefore take on risk.

The LIBOR rate is assessed with the figures submitted by the bank. The resulting composite interest rate is then used as a benchmark globally for banks and institutions in negotiating interest rates over all kinds of transactions, primarily short term interest rates. Student loans and mortgages represent just two examples of the many areas in which LIBOR is relied on to establish interest rates.

In recent years, multiple banks and financial institutions committed fraud pertaining to LIBOR by inflating or deflating the rate in order to benefit their own interests.

Some banks and institutions reported inaccurate rates in order to give off the image that they were more creditworthy and less risky, when in reality that was not necessarily the case. Such manipulation negatively impacts consumers of financial products, and this fraudulent activity is unlawful under United States and British laws and regulations.

Governments were initially slow to react to the LIBOR scandal, with at least one branch of the Federal Reserve attempting to address it with British regulators. By 2011, however, investigations ramped up and American regulators looked at certain big banks that submit interest rate estimates for LIBOR calculation.

The Department of Justice furthermore made white collar crime inquiries into the fraudulent and collusive manipulation of LIBOR. Even worse, some allegations arose that banks and traders were in communication regarding what the rates would be, which would be a blatant violation of insider trading laws.

In 2012, Barclays Bank paid fines of approximately $360 million to U.S. regulators (the Commodity Futures Trading Commission and the Justice Department), as well as fines to British authorities.

In mid-May 2014, a British brokerage firm was fined more than $2 million combined by U.S. and British authorities for fraudulent manipulation of the LIBOR rate.

In this particular case, the British firm worked with a trader at one of the big banks to make “misleading recommendations” to the firm’s employees who used that false information in interest rate submissions to the LIBOR-setting group. The brokerage firm’s brokers accepted hundreds of thousands as commissions in exchange for their help in the scheme.

Other lawsuits have been brought over recent months in order to recover damages for the money lost through LIBOR rate manipulation. As more banks deal with these suits and continue to negotiate with regulators over settlements, it will be interesting to follow not only the dollar amounts of those recoveries, but the evolution of laws and regulations in response to this scandal, as well as the financial institutions’ reactions in the form of improved compliance and self-auditing.