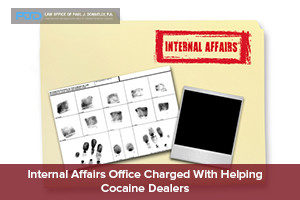 Proving that truth is stranger than fiction, a Miami-Dade police officer was arrested on April 8, 2014, for helping cocaine traffickers, including buying guns for the dealers, providing them with police intelligence, and helping one group of smugglers against another gang.

Stranger still, the accused is a lieutenant in Internal Affairs, which is responsible for investigating police wrong doing. This is an unusual turn in Miami criminal law, showing how surprising this area of law can be.

The Background of the Federal Criminal Case

The accused is Lieutenant Ralph Mata of the Miami-Dade Police Department. Lt. Mata has been with the department for over 26 years and has been part of the internal affairs division, known as the Professional Compliance Bureau, since 2010.

The Federal Bureau of Investigation (FBI) and the U.S. Attorney in New Jersey led the investigation against Lt. Mata. FBI agents stationed out of New Jersey connected Mata to cocaine smugglers.

Mata helped the smugglers transport cocaine using his knowledge of police movements and simply by using his own credentials to protect the smugglers from police detection.

Mata’s name was listed in a smuggler’s ledger book which authorities claim means that Mata had received payments of tens of thousands of dollars.

Mata allegedly also helped devise a plan to have a rival group of drug smugglers killed. Mata planned to loan out police uniforms to hit men who would then pull over the rivals and shoot them.

Mata is accused of helping transport drugs and weapons personally within the United States and to and from the Dominican Republic. He even suggested better smuggling routes for the cocaine distributors to use to avoid detection.

Mata’s long list of alleged crimes will mean that he will face numerous charges. The charges include:

1. Aiding and abetting a conspiracy to distribute cocaine,

2. Conspiring to distribute cocaine, and

The charge of receiving funds from drug sales carried a maximum potential sentence of ten years and $250,000 fine.

Mata Will Not Be Represented by the Police Union

The Miami-Dade police union has indicated that they will not represent him in the upcoming proceedings. This may well serve as a cautionary tale on two levels.

First, of course, is that anyone can be subject to a criminal investigation, even a seasoned internal affairs police officer. And second, you cannot assume that you will be protected by your employer, your union, or any other professional group.

You have to be prepared to assert your own defense in the event of criminal charges. And, even if you are technically represented by a group, the attorneys may be acting in the interests of the group (the employer, union, etc.) not your own personal best interests.

Should you find yourself facing criminal charges, such as gun and drugs charges such as Lt. Mata above, you will need experienced Miami drug crime attorneys to represent you in court. Contact Law Office of Paul J. Donnelly at 305-757-3331 for legal advice now.