Search Site
Menu
Home / Blog / Why is My Drug Arrest a Federal Crime?

Why is My Drug Arrest a Federal Crime? 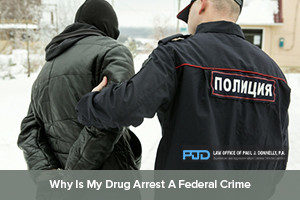 If you have been arrested for a crime that involves drugs, you may not understand the severity of your criminal actions.

Although many individuals do know that consuming or carrying drugs is illegal, most often don’t understand why they have been charged with a federal offense.

One of the biggest differences between federal and state crimes is that the sentences can be extensively longer and come with federal prison time rather than in a state penitentiary.

Your punishment can be much more severe when it comes to being charged with a federal crime, but there are several major reasons why you were arrested for a federal crime.

Drug trafficking is typically one of the common charges that many are arrested for and aren’t aware that they will be charged with a federal offense rather than a misdemeanor or felony.

Possession of drugs is similar to trafficking drugs, but is often dependent on the amount of the drugs in your possession at the time of arrest. Sometimes charges can be lessened to drug possession rather than being charged directly with drug trafficking.

Other criminal acts that can be combined include smuggling drugs, racketeering or money laundering. These crimes themselves can carry up to twenty years in a federal prison.

While these crimes can result in many different types of punishment, it depends on the federal government’s decision. Sometimes sentencing can differ due to the type of drugs that were involved. Drugs included in trafficking include cocaine, heroin, marijuana, and methamphetamine.

Why They Are Federal Crimes

While you may think you only committed a state crime, the federal government can step in for a number of reasons, which include:

If you have committed a crime and the state has pushed it to the federal level or the federal government has charged you, it is crucial to seek out the assistance of an experienced Miami federal crime attorney.

At the Law Offices of Paul J. Donnelly, P.A. at criminalattorneymiami.net, it is our job to ensure your rights are protected regardless of what you have been convicted of. Contact at 305-757-3331 or online to get the counsel you need from the start.