What Makes a Crime Federal? 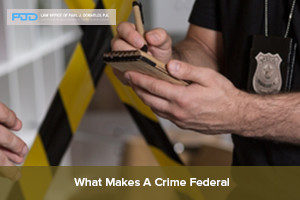 In the United States, there are two types of courts: state and federal. The jurisdiction of federal courts is limited to cases that specifically violate the terms of the Constitution. In most cases, federal courts only hear cases involving:

● Cases that directly involved the United States;
● Cases that involve a violation of the Constitution or other federal laws;
● Cases between the U.S. and citizens of another country;
● Patent, copyright or maritime laws.

But, there are cases that can fall under the category of a federal crime that many individuals do not realize. It is important to know what makes a crime a “federal” offense – especially if you are being accused or have been arrested for committing one. Federal courts have much different proceedings than state courts; therefore, you will need the assistance of a federal criminal attorney in Miami if you have been accused of a federal crime.

Crimes That Could Be Charged as Federal Offenses:

Sometimes a state case can overlap a federal case as well, which means you could face charges in both courts. There are thousands of different crimes that could be performed in one state and still charged as a federal offense.

For example, kidnapping a child and taking him or her across state lines could result in federal charges, as opposed to state charges for kidnapping and staying within the same state.

Why You Need a Federal Criminal Attorney in Miami

It is not difficult for the courts to push a state case to the federal government. Once your case is referred to federal courts, you will need the Best criminal lawyer Miami. Federal court rules vary greatly from state courts; therefore, not all attorneys are qualified to handle such cases.

If you are being accused of a federal crime, contact the Law Offices of Paul J. Donnelly right away. We offer no-obligation consultations and can assess your case right away. Contact us today by calling 305-757-3331.