Search Site
Menu
Home / Blog / Is It a Federal Crime to Travel with Marijuana?

Is It a Federal Crime to Travel with Marijuana? 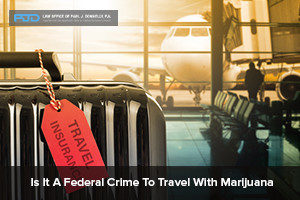 More states are starting to legalize the medicinal and recreational use of marijuana. But, if your state has legalized it, can you travel to another state?

Can you travel to a state that has legalized it to purchase it and bring it home? The answer in both situations is typically no. Even if the state you are traveling to has legalized marijuana, you could still be charged.

Marijuana is Illegal by Federal Law

According to Federal law, marijuana is illegal (read more about what constitutes a federal crime). While the federal government is allowing states to legalize marijuana, and each state being allowed to determine how they will handle that legalization, federal authorities are not going to stop enforcing the law—especially when it comes to interstate commerce.

Federal authorities will not tolerate the transfer of an illegal substance across state lines, regardless if that state allows marijuana. As far as federal law is considered, marijuana is illegal.

By taking marijuana over state lines, you are violating the local licensing and voiding any agreement the state had with the federal government. This basically means you could be charged with drug possession.

Taking illegal substances across state lines is a federal crime (read more about felony drug possessions). If you are found with enough marijuana and paraphernalia, then you could be charged with drug trafficking or worse.

Because most states have not legalized marijuana, it is unlikely you could travel between two states with marijuana (by plane, car or train) without facing legal consequences for doing so.

Contact an Attorney if You Have Been Arrested Crossing State Lines

If you were arrested with marijuana and are facing a federal crime, then you need an experienced team of criminal attorney Miami. The Law Office of Paul J. Donnelly can help defend your case against the federal courts, even if you were guilty of crossing state lines. To learn more about how we can help you, contact us today for a free case evaluation by calling (305) 757-3331 now.