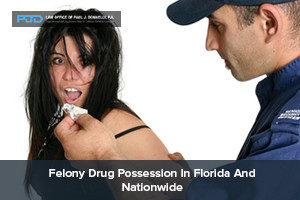 An “illegal drugs” possession arrest may be a misdemeanor charge or a felony charge in Florida and Nationwide. The charge will depend on the type of drug (in Florida certain types of drugs will automatically be a felony charge). The crime itself will also play a part. If the possession is found during another crime considered aggravated or in a school area, a felony charge is likely.

The Classification of Drugs

In Florida as well as states nationwide drugs are divided into categories called “Schedules.” Most classifications are adopted from, the Federal Controlled Substances Act (CSA); drugs are categorized by medical value related to the drug’s potential for addiction. Most states’ laws have five schedules, with Schedule I being most dangerous and Schedule V the least.

The Amount and Type of the Drug

Drug possession charges as a felony result when a person has possessed a particular drug that is in a schedule considered most dangerous. For example, in Florida and most states, heroin possession in any amount is a felony because it is classified as a Schedule 1 drug.

The amount of the drug in possession can also result in felony rather than misdemeanor charges. For instance, in some states marijuana is legal but possessing over an acceptable amount without regulated approval is still a felony.

Intent to Sell or Possession for Personal Use

Many times a person using drugs is the only victim but selling those drugs is seen differently. Simply, “A user harms only himself; a seller harms many”.

Drug possession for personal use typically carries less severe charges than possession with the intent to sell. The difference in punishment will vary state to state and reflect how the local law views the harm of the crime.

Contact the Law Office of Paul J. Donnelly, P.A. at 305-757-3331 to discuss about your criminal case. Our team of professionals will help you throughout the case and protect your rights. We are serving in Miami & throughout the state of Florida.