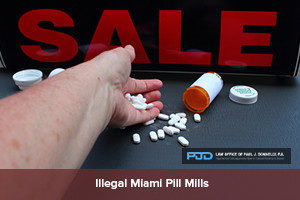 In March 2014, a Miami doctor was sentenced to 6 years behind bars for running what is known as a pill mill.

A pill mill is an operation where people can pay for pain medications at a doctor’s office or clinic. Doctors or staffers typically prescribe drugs like methadone, hydrocodone, and oxycodone among others.

Pill mills saw a relative rise in popularity in certain areas of the country hit particularly hard by the recession where people lost jobs, savings and homes, and faced painful depression. This has kept the U.S. Drug Enforcement Administration and state and local law enforcement busy busting illegal pill mills, which feed addictions and can lead to deaths.

Pill mills argue they operate under the color of law because they typically involve licensed professionals – doctors – giving out prescriptions. However, in many places including the state of Florida, doling out pain medication prescriptions like candy is actually illegal.

Such prescriptions should only be written in the event the patient actually needs the pain medications, and to the extent they need it. Some offices or clinics do properly prescribe and distribute pain medications in reasonable ways and to legitimate patients.

Many, however, take advantage of an environment where people are desperate for pain medications, and illegally traffic and sell these drugs. Some common aspects of an illegal pill mill exist where the clinic demands cash only payments, does not accept insurance plans to offset payments, and does not typically require appointments or conducts anything resembling a substantial physical examination of the patient prior to prescribing the medication(s). These pill mills also tend to not keep records, or at least not sufficient ones.

A few years back, Florida passed new legislation to combat the operations of pill mills. The Sunshine State had the nickname “Oxy Express” and people from all over traveled there for pills.

The newer laws banned doctors in the state from distributing any narcotics or addictive substances like oxycodone from their clinics or offices, and strengthened penalties against doctors, pharmacists or clinic staff that prescribed these medications outside of the medically accepted process or to anyone who did not actually need them. The laws also added required background checks for owners and employees of clinics.

The laws have been put to use as evidenced in the latest sentencing of the South Florida doctor for money laundering in connection with the oxycodone pill mill she ran. Another doctor was sentenced for similar charges.

In true fashion, they ran clinics where they accepted only cash, and also worked in clinics owned by two brothers whose clinics were shut down in 2010 and who were sentenced to long prison terms in 2012 for running a mammoth illicit prescription drug “pill mill” ring that made them tens of millions of dollars.

Many pill mill operators claim they are simply offering those in pain and opportunity to dull the pain and live more comfortably. For any doctor or medical professional who deals in prescribing pain medications, it is vital to understand the relatively newer laws and that such prescriptions must be written within the bounds of statute and medical standards.

For anyone facing federal or state charges, it is important to have the right lawyer in your corner especially if you truly believe you were simply writing legitimate prescriptions for patients in extreme pain.

If you or someone you know is facing drug crime charges in Miami, you will need the assistance of a drug crimes attorney Miami.

To confront such serious charges, choose a knowledgeable attorney. Attorneys with criminal law experience are a must in difficult cases. Contact the Law Offices of Paul J. Donnelly, P.A. at criminalattorneymiami.net at 305-757-3331 for drug crime law advice.