Drug Crimes 101: What is the Difference Between Drug Possession and Drug Trafficking? 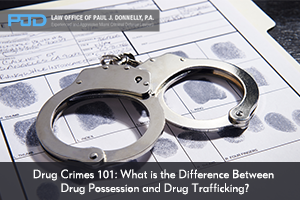 In the state of Florida, all types of drug crimes are met with severe charges and equally severe consequences for those found guilt. However, there are several offenses that may be difficult to fully understand. The specific substance, the amount a person has, the other items discovered during the search and any statements made by the accused individual can impact the charges, in addition to the penalties.

The two most common drug crimes that are prosecuted in the state are drug trafficking and drug possession.

Drug Crimes: What is Drug Possession?

People facing drug possession charges are typically being charged with a misdemeanor. As a result, these crimes are handled at the state level. Even though these crimes may still carry potential time in jail, or significant fines, the consequences aren’t as severe as the ones associated with drug distribution or drug trafficking.

Drug Crimes: What is Drug Trafficking?

Drug trafficking occurs if you sell or illegally transport a controlled substance across the state or national border lines. In some situations, just possessing a significant amount of any type of illegal drug can result in a person facing drug trafficking charges.

If you have been accused of drug trafficking, then you are facing felony charges. In most cases, the prosecutors for these cases are extremely aggressive and there are often minimum sentencing requirements. What this means is that even if it is the person’s very first offense, if they are convicted, they may spend several years, or more, in prison and the judge does not have any say-so regarding alternative sentences.

The Seriousness of Drug Crimes and their Potential Consequences

Due to the seriousness of drug crimes and the potential penalties that someone charged with any drug related offense, it is best to hire an attorney to help with the process. There are several defense options available for any case that involves a drug crime, which range from challenging the evidence, or in some cases, the legitimacy of the search and seizure process. It is best to contact an attorney as soon as possible after being arrested to ensure they can protect the defendant’s rights and that they make the right decisions for their situation.

If you are facing any type of charges for drug crimes, contact the experienced criminal law attorneys at the Law Office of Paul J. Donnelly, P.A. by calling 305-757-3331.

5 Questionable Activities That Are Legal