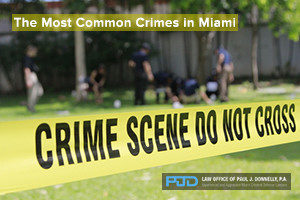 The crime statistics for Miami for the year 2015 show that the number one crime (in frequency) is theft . Theft accounts for just under sixty percent of all crimes committed in Miami, according to the most recent available statistics.

Interestingly enough, car theft has its own category on the pie chart for crimes in the city – so car theft and theft account for 68 percent of all reported crimes together. Robberies and burglaries make up another 20 percent on the list, with the rate of assaults at 10 percent. In Miami, the murder rate continued to be at a much higher rate than in many other U.S. cities. On average, there were 17 murders for every 100,000 people in Miami, and almost 5 per 100,000 in the rest of the country.

Miami has long been the center of attention for this major felony, but the chances of a citizen being involved in this crime is nowhere near the statistical chance of being a victim of theft or an assault. The murder rate actually dipped in 2015, in comparison with 2014 when there were about 19 murders per 100,000 people. Hopefully when the statistics are released for 2016, the numbers continue to show a downward trend.

It is getting harder for perpetrators of certain crimes to get away without some form of visual evidence being left behind. More crimes are being caught on film either through the victim’s own smartphone, through a witness’ phone or on street cameras  – all of which can help the police in their efforts to slow down crime on Miami’s streets. The hope for these cameras has always been not only to help gather evidence of a crime committed, but to also discourage people from choosing to do something wrong in the first place.

In the day to day lives of Miami citizens, the crime frequency has unfortunately beaten the national averages by a wide margin. The daily crime rate is 1.65 times higher than the overall Florida average and 1.88 times more than the national average per 100,000 residents. That would tend to make Miami residents more likely to see a crime during an average day. With surveillance cameras, cell phone cameras, and the amount of crimes being committed it would seem to make sense that more people will be arrested moving forward.

When you consider that many times eyewitness accounts have been discredited in the past, the more people involved may not necessarily lead to more just prosecutions. Pictures from a cell phone can be blurry, which may not be very fair to a person who only looks or dresses like the person seen on camera. Surveillance cameras also have limitations that could conceivably send the wrong person to jail for a crime they didn’t commit.

That is why, no matter what the available evidence suggests, a person who is arrested for a crime needs to hire an experienced Miami Criminal Attorney . The person arrested may not be thinking very clearly at the time of arrest and even may make a mistake when confronted with erroneous evidence from one of these unreliable methods of identification. Even If a person is guilty, it still makes no sense to let justice move forward without an expert representative next to you to ensure all your rights are protected to the full extent of the law. If you’ve been arrested for a crime in Miami, contact our office today to find out how we can help you.