5 Questionable Activities That Are Legal 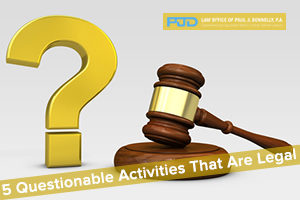 If you have ever rolled through a stop sign or snatched a single grape from your grocery store’s produce section, you have technically broken the law.

Most people have a general idea of what constitutes a crime. What you may not realize is that certain behaviors are actually quite legal, even if they’re not exactly smart choices.

If you have been charged with a crime, a Miami criminal defense lawyer can explain the law and your rights.

You can’t visit the golden arches without wearing shoes, but driving your car in bare feet is technically legal in all 50 states. Just because it’s legal, however, doesn’t mean it’s a good idea.

In a survey conducted by an Australian insurance company, 60 percent of drivers surveyed reported driving in flip flops or stiletto heels. Interestingly, 38 percent also reported their shoe had fallen off immediately before an accident.

Police can also ticket a driver if they determine the driver’s lack of footwear caused the accident. In short, you may not be charged with a crime if you drive barefoot, but you could end up being held liable for negligence.

Fans of the Dustin Hoffman movie, “Rain Man”, may remember how the character got rich quick by learning how to count cards in blackjack. In the 1980s, a group of MIT students also outsmarted casinos by developing complex card counting strategies.

Counting cards is perfectly legal, but casinos don’t have to let a card counter play. In most cases, casinos will try to put a stop to card counting if they see it. They may also ask you to leave if they suspect you are counting cards.

3. Keeping a Tank at Home

Depending on where you live, local laws may prevent you from driving a tank down the highway, but it is generally legal to own one. In most cases, people purchase old military tanks as part of a collection of war memorabilia.

According to a Wall Street Journal report, tanks can also have operational guns if state law allows it and the owner obtains a federal Destructive Device permit.

4. Police Lying to You

Although some courts have placed limits on how much police can engage in “bluffing” tactics to coerce people into making confessions or engaging in criminal activity, police can – and often do – lie when interacting with citizens.

Police are trained to elicit confessions from criminal suspects, and they frequently use bluffing techniques and outright lies during interrogations. Police can also lie when asked if they are working undercover.

Although physical punishment in Florida public schools declined by 89 percent between 1991 and 2011, there were still reports of more than 3,000 students subjected to spanking or paddling in school in 2011.

Have You Been Charged with a Crime?

If you have been arrested in Miami, or you’re facing criminal prosecution in state or federal court, you need a Miami criminal defense lawyer on your side right away.

The law is not always black and white. In many cases, gray areas in the law make it difficult to know exactly what kind of charges you’re up against.

An experienced Miami criminal lawyer can explain your rights and help you begin creating a defense strategy designed to help you fight back and win your case.