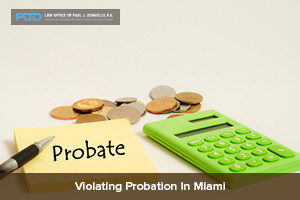 In the aftermath of a crime, a defendant accused of that crime who is convicted or agrees to a plea deal will often face a sentence that includes probation. Probation may follow a prison term or may be the sentence itself that allows the defendant to avoid jail time. Probation provides a major stepping stone for the defendant, who is allowed to go free back into society for a certain amount of time on the condition that they obey the restrictions of that probation.

These restrictions will often include a geographic limit of where they may go (e.g. they cannot leave the state) as well as certain people they may not allowed to be in contact with during the probation term. Those on probation will also have to routinely check in with a probation officer as a condition of the terms.

Probation offers a break for the defendant to still work and rebuild their life. A violation of the probation, however, could result in a retraction of that probation such that the defendant goes back to jail, or faces even stiffer probationary terms.

Violation of Probation May Lead to Incarceration

If a defendant violates their probation, either through not checking in with the probation officer either by phone or through an in-person meeting, or committing another crime, or violating the terms of probation in some other way such as skipping a drug test or failing that drug test, they likely face a revocation of that probation, and a step toward a second chance will be taken away.

Other circumstances may include not paying penalties or fines associated with the plea or the conviction, or not attending classes that educate on drug use or other types of criminal behavior.

In the state of Florida, a judge will sign a warrant for police to come arrest the defendant, and that person will not face a trial by jury, but will come before the judge alone. The prosecutor must demonstrate by a preponderance of the evidence that the probation violation occurred. This is an even lower bar than the “beyond reasonable belief” standard for proving an ordinary crime.

More simply put, for crimes there must be very convincing evidence to convict, whereas in the case of a probation violation, the prosecutor must just convince the judge that the violation more than likely occurred (consider it as showing a 51%-49 % likelihood, whereas for a crime it is a much higher bar).

If the prosecutor succeeds, the defendant can have the probation conditions tightened or the probation term extended, or just simply goes back to jail.

In Florida, in addition to general probation as described above, there is also an “administrative probation” in which the defendant must obey terms but does not need to be in touch with a parole officer.

There are also classifications of “community control” where the defendant is supervised while on probation and can be surveilled by police and can only be in a certain residence for part or all of the time. For sex offenders as well as drug offenders, they can also be under surveillance by police and/or go through a treatment plan that may also include submitting blood samples or urine samples to the state for testing.

For anyone accused of violating their probation, it is vital to have a competent and skilled defense team, particularly given that the bar of proof for the state or county is notably low.