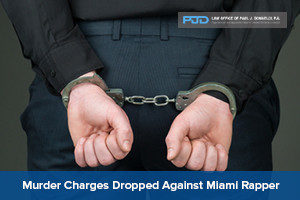 Murder charges have been dropped for Miami Gardens-based rapper, Jordan White. White was charged with the murder of KenzyDuroseau in front of Duroseau’s home on March 29, 2014. The rapper was named as a suspect following the statement by a witness to the killing who believed that he saw White (whose stage name is “White Boy”) at the scene of the crime. The eyewitness said that one of the suspects looked like White based on a music video the witness saw online featuring White. White was accused of being one of three people involved in the shooting death of Duroseau.

Out of the Country, Out of Jail

However, the eyewitness apparently was mistaken. White successfully claimed that he could not have been one of the shooters on March 29, 2014, because he was in Sonora, Mexico, at the time with several friends.

White voluntarily returned to the United States to face criminal law charges once an arrest warrant was produced by the police based on the statements by the eyewitness.

The police and prosecutors in Miami had charged him along with Desmond Owen, who is still under investigation for his participation in the fatal shooting. After being confronted with the evidence that White provided, specifically that he was in Mexico at the time of the deadly criminal shooting in Miami, police agreed to release him, pending their investigation, in May.

The police formally dropped their charges against him, releasing him of any suspicions of the crime.

A Case of Mistaken Identity

Witnesses to a crime can be both informative, but unfortunately, can sometimes complicate a criminal case. That is because while witnesses obviously will have first-hand knowledge of the events at issue in a given criminal case, the memory of many witnesses is spotty. The witness can misremember events, misidentify people that may look similar, or make subjective judgments (personal judgments, not based on fact necessarily) on what actually occurred and who may have committed the crime at hand.

It is extremely important for defendants in a criminal case to be sure that they get a fair and just defense of their own rights in the face of potential misidentifications by a witness or subconscious prejudice by a witness that may sully the reputation or even jeopardize the freedom of a defendant.

If you face serious criminal charges in Miami, Florida, it is important to ensure that you have adequate representation in order to protect your personal rights and freedoms. Personal rights and freedoms can be quickly put in jeopardy by overzealous prosecutors or witnesses who may possess biases against a defendant or have a fuzzy memory on the critical events of the crime.

Visit https://criminalattorneymiami.net or contact Paul J. Donnelly, P.A. at 305-757-3331 to discuss about your case. Serving Miami & throughout Florida.