Mother Faces Murder Charges in the Deaths of Her Two Children 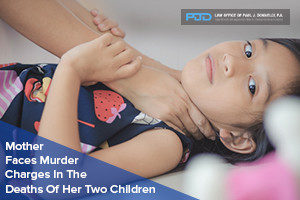 A Tampa woman, Julie Schenecker, a former U.S. Army sergeant, has been charged with the murder of her 13-year-old son and 16-year-old daughter. This sad criminal law case has made the news throughout Florida from the panhandle to Miami.

The defendant was a so called “soccer mom” who had retired from the military to raise children. Her husband is an active active colonel who was recently deployed to the Middle East before the shooting death of the two children.

While Ms. Schenecker faces criminal charges for first-degree murder, her husband recently filed for divorce and a wrongful death lawsuit.

Criminal insanity and mentally ill, while sounding the same, do not have the same legal meaning. To be criminally insane, a defendant must not be able to appreciate the criminality of his or her action, which would make the defendant unfit for trial.

Such a defendant would likely be sent to a mental hospital for their protection and for the protection of the community, rather than jail since there would be little sense in punishing someone who cannot comprehend what they did.

Alternatively, one can be mentally ill, but not criminally insane for the purposes of a trial. In the case of Ms. Schenecker, she does have a documented history of mental illness.

She apparently suffered from depression in the 1990s. In 2001, she was even hospitalized for nine months for severe depression. She also may have suffered from bipolar disorder and schizo effective disorder, as well.

While these afflictions demonstrate mental illness, a court jury would have to find that she simply could not tell right from wrong or even understand her actions in order to be legally insane.

Thus, a claim of legal insanity would mean that Ms. Schenecker admits to committing the murder, but that she was insane, so her action was, in a way, justified.

To meet the requirements of Florida’s legal insanity statute, the defendant must prove “by clear and convincing evidence” that when the crime was committed:

1. the defendant had a mental illness and

2. because of the condition,

a. was unable to understand what he or she was doing or understand its consequences, OR

b. did not know what he or she was doing was wrong.

All of this assumes that the prosecution has proven beyond a reasonable doubt that the defendant has committed the crime. In this particular case, though, it appears that both sides agree that she committed the crime, but differ on whether she was sane or insane.

If you or someone you know is facing criminal charges in Miami, you will need the assistance of a criminal lawyer to navigate the Florida criminal statutes.

To confront such serious charges, which can result in significant jail time, you must choose a knowledgeable attorney. Contact Miami criminal lawyer at the Law Office of Paul J. Donnelly for criminal law advice at 305-757-3331.