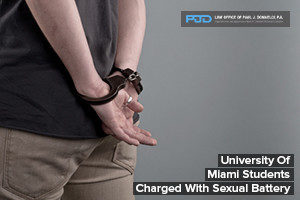 The University of Miami and Coral Gables communities in Miami suffered a terrible surprise when two Miami Hurricane football players were charged with sexual battery on July 8, 2014.

Coral Gables police charged two 20-year-old players, JaWand Blue and Alexander Figueroa, with getting a 17-year-old woman drunk and then assaulting her. The two men apparently got the woman so intoxicated that she was unable to resist their advances and then raped her. Later the female student was able to leave, and reported the incident to campus police.

The two student athletes were permanently barred from the UM football team on Tuesday July 8, 2014, according to the university’s athletic director, Blake James. The school has also begun an internal investigation. During the course of the investigation, the university has barred the two men from the school’s buildings and from all school-sponsored activities.

The incident apparently occurred early on July 5, 2014 in Figueroa’s dorm room in Pearson Hall on campus. The female victim was also a UM student. She reported the crime to campus police, who in turn referred the case to Coral Gables police. The Coral Gables police investigated and made the two arrests.

This unfortunate incident is just one of many sexual assaults that occur every year on college and university campuses. Some incidents sadly go unreported, as victims are afraid to approach officials or face the perpetrator in court or a hearing.

Even more disturbing is that campuses across the country often cover up or ineffectively investigate sexual assault claims. These claims are extremely important criminal matters that should be taken seriously. Investigations must be thorough and fair while respecting the rights of the victim as well as the accused.

Frustratingly, some college campuses apparently are more concerned with protecting their image without protecting the rights of potential victims or providing appropriate legal proceedings.

Campuses are required under federal law to report sexual assaults and other violent crimes to the U.S. Department of Education under the Jeanne Clery Act. Schools must also publish these statistics on an annual basis every fall so that prospective students and current students can know of any criminal incidents that occurred on campus.

Running a Tight Ship at UM

These two now-barred students are only the most recent football players to learn that UM has a strict policy regarding arrests. Five football players dating from 2011 have faced immediate dismissal from the Miami Hurricane football program following arrest.