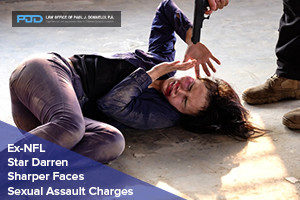 Retired professional football player Darren Sharper faces sexual battery charges in California and Arizona. However, Miami-Dade prosecutors have dropped their rape case against him since they have concluded that they do not have sufficient evidence to charge him.

Police and prosecutors in California and Arizona have alleged that Mr. Sharper had spiked the drinks of women in bars and then sexually assaulted the women once they were helpless. Additionally, there are charges that may be pending in Louisiana and Nevada. Alternatively, Sharper’s attorneys have claimed that any sexual relations with the women was consensual.

The women who have charged that Sharper has assaulted them, have alleged that he drugged them with sleeping pills. Once drugged, Sharper allegedly sexually assaulted them.

In the recent matter in Miami Beach, a 22-year old woman reported that she met Sharper at a club in South Beach. She, Sharper, and some friends all went to his condo to continue to party. She apparently then passed out in his bed. She then claims that he assaulted her.

The Miami Beach woman did not report the matter to Miami-Dade police until she saw other similar reports about Sharper in other states. She felt compelled then to come forward.

He Said, She Said

Unfortunately for Miami criminal prosecutors there was little physical evidence to support their case against Sharper. The police only could use her word against that of Sharper.

Further, while the woman said that there were friends with her when she went to Sharper’s condo, the police were not able to find any of the friends to confirm her description of what transpired that night. She also seemed to give details to her story that did not add up.

And finally, the fact that she delayed in reporting the crime to the police would provide the defense attorneys representing Sharper ammunition to call her credibility into question.

While the delay in the accuser’s report of the crime in Miami Beach may expose her to attacks on her credibility in court, such behavior is not unusual among victims of violent crimes. Quite often, if a victim is hesitant to come forward initially, the victim will feel more comfortable to go public if she see others speak out before her. This is potentially what happened in the case of the Miami Beach accuser who came forward only after she saw news stories about Sharper attacking women in other cities.

A Surprising Turn for Sharper

Mr. Sharper has been seen as a model citizen. As a retired five-time Pro Bowler from the NFL, he has participated in many charities, particularly those that support women. He also volunteered to participate in a book called NFL Dads Dedicated to Daughters, which was sponsored by the NFL. The book was designed to encourage positive treatment of women.

If you or someone you know is facing criminal charges in Miami, you will need the assistance of a criminal lawyer to navigate the Florida criminal statutes. To confront such serious charges, which can result in significant jail time, you must choose a knowledgeable attorney. Contact the Law Office of Paul J. Donnelly for criminal law advice at 305-757-3331.