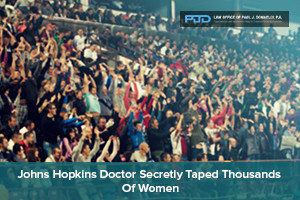 Nikita Levy, an OB/GYN at Johns Hopkins University Hospital, a major renowned hospital in Baltimore, was found to havetaped hundreds of his patients during private exams without their knowledge over years. This case is a terrible criminal law matter that affected thousands of unsuspecting victims. Dr. Levy had worked at Johns Hopkins East Baltimore Medical Center since 1988 in a clinic that served under served women.

Police discovered this issue in February 2013. The police found that the doctor had taped thousands of women, taking sexually explicit photos and videos using miniature cameras. He alleged conducted exams that were unnecessary in order to take videos of the women.

Levy was fired in February 2013 after a co-worker became suspicious and reported him to Johns Hopkins management. After he was fired, Levy committed suicide. Police later found six cameras concealed in pens, two cameras hidden in key fobs, as well as four computers and external hard drives from Levy’s home.

A large class-action group of women who have been victimized by Levy have joined together in a lawsuit against Johns Hopkins Hospital. The hospital recently settled for $190 million with 8,500 members of a class action. The women had sued the hospital for alleging a terrible violation of their trust and their privacy.

In order to allocate the $190 million fairly between the thousands of victims in the class action suit, there will be a forensic assessment of their harm from the invasive videotaping by their doctor. The women will be analyzed by a forensic psychologist to investigate the level of their psychological injury. The women will be divided into four classes, from mild to severe psychological injury. An allocation team will then recommend each amount of payments for each member of the plaintiff class action group.

The hospital and the plaintiffs’ attorneys have been in negotiations for 18 months over a settlement amount. The settlement received preliminary approval from the Baltimore City Circuit Court, which must go to a fairness hearing in September 2014. If the settlement is deemed fair by the court in September, then the settlement could be distributed starting in October 2014.

Visit https://criminalattorneymiami.net or contact Paul J. Donnelly, P.A. at 305-757-3331 to discuss about your case. Serving Miami & throughout Florida.