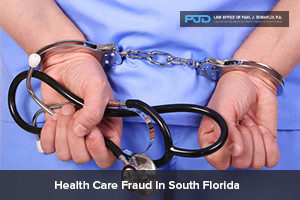 Health care fraud in Florida takes on many faces, but seemingly more predominant among the headlines is fraud involving the federal programs of Medicare and Medicaid. Both programs provide federal dollars for patients to pay doctors’ bills, hospital bills, and nursing home bills, as well as for prescriptions and treatments. Such funding can also be used for home health care services.

Medicare and Medicaid are meant to aid the elderly and the poor who cannot otherwise afford medical care. Unfortunately, many health care providers and other private companies that operate within the health care sector seek to take advantage of these federal dollars.

States are also typically active participants in Medicare and Medicaid, as they will administer these programs within their states, and sometimes kick in state revenue as well to jointly fund them.

Thus both state and federal authorities (ie. the FBI) take health care fraud very seriously. Health care fraud often takes the form of intentionally reporting inaccurate data to state and federal authorities in order to gain greater reimbursements from the government for Medicare and Medicaid patients than actually should be remitted. Thus overbilling, creating fake patients or reporting non-existent procedures all fall under this umbrella.

Not only is it stealing from the federal government, but it also carries with it decision making that may not be in line with the best care and options needed for a particular patient, since health care providers may choose treatments or provide care that will bring in the biggest reimbursements and may not necessarily be what the patient needs.

Miami in particular has been known as a popular area for health care fraud, particularly related to Medicare and Medicaid. For example, about a year ago, a Miami Herald article reported that under the Affordable Care Act’s provisions, federal authorities temporarily banned new home health agencies in Miami-Dade County from participating in either Medicare or Medicaid for six months.

This decision was prompted by the ongoing fraud experienced in that area related to these programs, and specifically how there was a disproportionate amount of home health agencies reported in the Miami-Dade area relative to the amount of patients (as reported 1,960% higher in Miami). This led authorities to believe that more reimbursements were being sought than were actually necessary.

Other schemes are kickback-oriented, in which health care providers will actually give kickbacks in one form or another to patients or facilities to use their services and keep things quiet.

The False Claims Act is a federal statute that allows citizens and the federal government to go after those who commit these types of fraud and reap the illegal benefits of federal money intended for the actual legitimate care of the elderly and poor.

Additionally, under Florida laws, it is a crime to make false or fraudulent insurance claims, which includes claims in the health care sector. Violators can go to prison, face steep fines and penalties, and lose their licenses to practice or operate within the state.

Those who believe that a health care fraud is afoot in Miami-Dade should consider the option of reporting to the authorities, or if it is a Medicare and Medicaid fraud, becoming a plaintiff on behalf of the government under the False Claims Act. If successful, the plaintiff can potentially reap a bounty off of money recovered.

On the other side, health care providers and those who do business with them must be aware of the federal and state laws governing fraud, and do business carefully. If accused of engaging in health care fraud, such as with Medicare and Medicaid payments, it is important to have competent representation to ensure a vigorous defense.

Contact the Federal Criminal Defense Attorneys at the Law Offices of Paul J. Donnelly, P.A. if you have been questioned or arrested for healthcare, Medicare or Medicaid fraud.

Our experienced federal criminal defense team can help you understand the ins and outs of the charges. Contact us today at (305) 757-3331 to set up an initial consultation and to understand how we can help you.