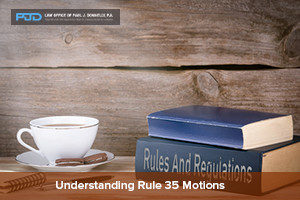 One way in which federal criminal defendants can increase the likelihood they will receive a lower or reduced is by cooperating with the government.

Since 2002, my practice, Law Offices of Paul J Donnelly, has handled numerous post-conviction matters, including helping scores of clients receive the benefit of a Federal Rule 35 Motion.

In almost every case, I have been able to convince the sentencing judge to grant a greater reduction of sentence than the reduction argued for by the federal prosecutor after the motion is filed.

The sentencing judge may consider all cooperation, whether performed before or after sentencing, but if a defendant received a sentence reduction at the time of sentencing for cooperation given prior to sentencing, the defendant will not be credited twice for the same cooperation.

Who can File a Rule 35 Motion?

Is a Rule 35 Motion Guaranteed if Someone Cooperates?

Merely giving prosecutors or law enforcement information about others may not rise to the level of being considered “substantial assistance” – unless the information provided leads to an arrest, indictment, or a conviction.

If a Rule 35 Motion is Filed, Can a Court Go Below a Mandatory Minimum Sentence?

With the filing of a Rule 35 motion for reduction of sentence, the sentencing judge can go below the mandatory minimum sentence to whatever the court deems “reasonable” and is supported by the level of cooperation.

Upon the Filing of a Rule 35 Motion, How Much Can a Court Reduce a Sentence?

Generally, prosecutors will give their recommendation as to how much of a reduction is supported by the level of cooperation.  The court is not bound by the prosecutor’s recommendation.

In every instance, I ask the court to give a greater reduction than what is requested by the prosecutor in support of the Rule 35 Motions.  The court is not bound or constrained to impose what is asked for by the prosecutor.

The court could grant time served or a much lesser sentence than sought by a prosecutor, as long as the sentence is deemed “reasonable” and is backed by the level of cooperation itself.

What are the Pros and Cons of Cooperating to Obtain a Rule 35 Motion?

The “pro” or benefit is obvious.  When one’s cooperation rises to the level of substantial assistance, his or her sentence is reduced.  This means the get out of jail before they would have under the original sentence and may have their term of supervised release or probation reduced too.

The “con” or risk in cooperating may be that the person is putting himself or herself in harm’s way by assisting he government.  This is generally not an issue for those who cooperate, but it must be considered and discussed with an attorney.

There are safeguards that can be put in place by the government and law enforcement if necessary.  If one is in custody and cooperating against another person in custody, the can be separation orders issued that prevent any further contact between the two persons.

In the rare and extreme cases, the federal government can place cooperators into a witness protection program, if the need arises for such measures.

Can a Person Cooperate to Help Another Person Obtain a Rule 35 Motion?

When one person cooperates with the federal government in order for another party to receive a Rule 35 Motion, this is called “third-party cooperation”.

Is It Necessary to Use the Services of an Attorney to Help Obtain a Rule 35 Motion?

Having an attorney represent you or a loved one at this critical period is vital.  The attorney can pursue the prosecutor and ensure that the Rule 35 motion is in fact filed and filed timely.

Also, once the Rule 35 Motion is filed, a rule 35 motion lawyer experienced in this area can be tremendously helpful in guaranteeing you or a loved one the greatest reduction possible based upon the level of cooperation that has been provided.

Like most things, experience matters, and its no different when considering cooperation and pursuing a Rule 35 Motion.

If you or someone close to you needs an criminal attorney who is highly experienced in handling cases where clients cooperate with the government and seek a Rule 35 Motion, please call Law Office of Paul J Donnelly at 305-757-3331 to discuss how I can help you. My office is locate in Miami, but I handle federal cases throughout the United States.