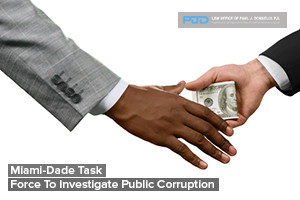 This move comes after the Miami-Dade Police Department closed its public corruption task force as a budget-saving move. Four of the county’s corruption detectives were sent to a Federal anti-corruption task force, but without the police department’s task force there was hardly any scrutiny of state and local offenses in the Miami area according to some state investigators.

The unit was dismantled at the instruction of Mayor Carlos Gimenez. The unit had been criticized as bloated and inefficient. The mayor believed that by concentrating public corruption efforts with the FBI task force in Miami, cooperation between the county and FBI would increase.

The creation of the State Attorney’s task force hopes to correct that by restoring a group of detectives who will be responsible for sniffing out public corruption. The county’s police union has applauded the plan as an important project that may combat public corruption in the region.

The State Attorney’s Office’s proposed task force apparently will follow the same aggressive tactics used by the Miami-Dade Police Department. The police famously pulled out all of the stops against former City of Miami Beach procurement officer, Gus Lopez, in order to pursue his case. The police unit reviewed Lopez’ bank records, correspondence, and city contracts looking for suspicious activity.

Additionally, the detectives recorded Lopez accepting a cash bribe with a cooperating conspirator in a car. Then the detectives also flipped Lopez’ wife against him. She is expected to testify in his upcoming trial, alleging that she helped him launder money from the cash bribes from prospective, crooked bidders. Lopez had allegedly received money from bidders for years in return for inside information on upcoming public contract bids.

The new task force will be made up of ten investigators and detectives from state and local law enforcement agencies.

A Large Pot of Money at Stake

The Miami-Dade area has a large amount of public funds that will be spent over the upcoming years on infrastructure improvements and renovations. Upwards of $3 billion in upcoming public works projects will be bid on in the near future.

Such a large pot of money is extremely tempting to unscrupulous contractors. These projects include $1.6 billion to be spent on upgrading the county’s old water and sewer system; a school bond valued at $1.2 billion, which will be spent on Miami-Dade school infrastructure; and a $20 million bond for Homestead for infrastructure improvements.

Visit https://criminalattorneymiami.net/ or contact Paul J. Donnelly, P.A. at 305-757-3331 to discuss about your case. Serving Miami & throughout Florida.