Sealing and Expunging Records in Miami-Dade 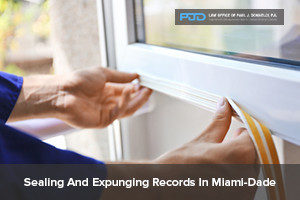 Many people who have previously been arrested but not convicted of a crime can nevertheless have that arrest record haunt their lives in many ways.

It can hurt their job search, can result in denial of a mortgage or a lease to rent an apartment, or could hinder them in obtaining credit. Employers and bank loan officers, among others, run background checks on applicants.

This is why it is advisable for those arrested of a crime but not convicted to have their records sealed or expunged. In order for someone arrested for a crime to seal or expunge their conviction record, they must first get permission to do so from a court.

A person also can seal or expunge only one arrest in their entire lifetime.

It is important to understand that a conviction or guilty plea is not the first step to having a record. Rather, an arrest itself effectively occupies an individual’s criminal record, even if the prosecutor dropped the case or a judge dismissed the charges.

A sealing or expungement of an arrest record effectively prevents the public from seeing a person’s arrest history. The difference between sealing and expunging a case in Miami, like most jurisdictions around the United States, is simple.

An expungement of the record results in the actual destruction of the arrest record. A record can be expunged where the case was dismissed by a judge or through the prosecutor dropping the charges before the case progressed past the arrest and/or charges stage.

This makes perfect sense as the dismissal of charges should mean that the arrest cannot haunt the defendant for the rest of his or her life. Only one state agency – the Florida Department of Law Enforcement – will have some record of the arrest, but no county or city court or clerk will.

Where a case is settled through a plea bargain without any trial or adjudication before a judge, that file cannot be destroyed and eliminated from the official record, but it may be eligible for sealing.

If granted permission to seal this, the file is literally placed in an envelope and sealed shut. No one may view the sealed file unless the court grants an order to unseal the record.

There is no time limit on when a record can be sealed or expunged. So long as the case itself is closed, the defendant can petition the appropriate court for a seal or expungement.

What Cannot Be Sealed?

Not all cases are eligible to be sealed or expunged. Naturally, cases with actual convictions or guilty pleas cannot be expunged or sealed.

A laundry list of offenses for which a defendant is found guilty, even if there was a “withhold of adjudication,” disqualify an applicant for sealing or expungement of their arrest record on any other matter.

These include aggravated assault and aggravated battery, child abuse, kidnapping, homicide and manslaughter, sexual battery, sexual activity with a child, and many others, which all automatically disqualify an applicant for expungement or sealing of an unrelated arrest.

Therefore, it is vital that the person seeking a seal or expungement have a clean record voice of actual past convictions.

The team at Paul J. Donnelly, P.A., in Miami, Florida, offers skill, experience, and knowledge in the areas of sealing and expungement of criminal records. Contact us today at 305-757-3331.