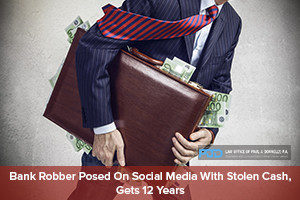 There’s nothing like sharing your spoils on social media—that is unless you are a bank robber revealing not only the stolen goods, but your identity.

A bank robber in Cleveland, Ohio was captured after posting a picture of himself and the stolen money on Instagram, according to Cleveland.com. Arrested December 2013, Rodney E. Johnson, Jr. only 21 at the time, was sentenced to twelve years.

Johnson was convicted of robbing the Fifth Third Bank in Cleveland Heights. Using a silver revolver and walking away with $6,701 in cash, Johnson would have gotten away with it had he not posted a picture of himself on Instagram with the money. The FBI was able to match Johnson’s Instagram photo to bank surveillance and it only took four days for them to identify and arrest the suspect.

Johnson was released from prison for a separate crime only three months before committing the robbery at the bank. He had served a four-year sentence for aggravated robbery before being released on parole.

Social Media and the Police

Police and federal officials are turning to social media to help capture criminals, gauge a person’s behavior, and even stop child molesters/pornographers. To police, social media is a valuable resource that not only humanizes police departments, but allows them to connect with their communities.

While this is a great thing, offering more trust between police and the public, police tend to also use social media to make their arrests, and not in a good way.

There have been instances where police use social media to investigate a person’s private life, interview friends and find affiliations, all without a warrant.

Unfortunately, there is no claim to privacy when you publish something on social media, because by posting it, you no longer have an expectation of privacy.

Were You Arrested Because of a Social Media Investigation?

The police may assume you have no expectation of privacy, but this does not mean you should allow police to use social media against you. Whether you are arrested for robbing a bank or not, you do have some expectations of privacy.

A bank robbery charge is a serious offense and you need an experienced Miami bank robbery defense lawyers to represent your case. Contact the Experienced Attorney at Law Offices of Paul J. Donnelly, P.A. today by calling (305) 757-3331.