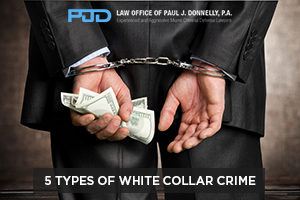 There are many different types of crimes that may result in a prison sentence. However, while most of the time we think of crimes like robbing a bank, theft, burglary and even murder, there is also a whole world of non-violent crimes called white collar crime.

A white collar crime is often one where the victims lost out financially one way or another – like cases of credit card fraud. But, there are many other types of white collar crime as well that range from counterfeiting and forging documents to tax evasion.

One of the most common types of white collar crime today are cyber crimes that can lead to the loss of credit card and other personal information such as home address, phone number, and even social security numbers. These sorts of crimes can pop up anywhere – from an online job listing to a faked product page that captures all your personal info – and millions fall victim to these sorts of crimes. Millions have lost money in numbers both small and large due to internet schemes like this.

Money laundering is a serious crime. It is where someone takes money from racketeering schemes (illegal businesses ran for a profit), the sale of illegal drugs, the robbery of an individual or bank, or other embezzlement and “cleans” it. Basically, making the money appear to come from a legitimate source, or making it entirely untraceable.

Tax evasion can include a number of things, including failure to pay taxes owed to the government, and failure to file tax returns at all. Tax fraud, on the other hand, is what happens when you falsify information on a tax return, whether it be the amount you made, the amount you spent, or filing under someone else’s name without their permission. For example, continuing to file a tax return for your elderly parent(s) if done properly can be okay – but if you do so without their permission, or especially after their passing, then it would be considered fraud.

Another common type of white collar crime is counterfeiting and/or forgery. Counterfeiting is the act of printing up fake money and passing it off in circulation with real money, and is a federal offense. Counterfeiting is a type of forgery – but forgery is much broader and can include documents, valuable goods (gems, artifacts) and artwork among other things that may be worth a good deal of money.

If you have been accused of or arrested for a white collar crime, then you should reach out to one of our criminal defense attorneys at The Law Office of Paul J. Donnelly. We can answer all your questions and help you through the legal process and ensure your rights are protected along the way.

Your Rights After You are Arrested