Search Site
Menu
Home / Blog / Your Rights After You Are Arrested

Your Rights After You Are Arrested 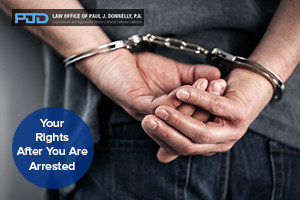 According to the FBI’s crime statistics, in 2015 there was an increase of 3.9% in the approximate number of violent crimes in the United States as compared to the year 2014.

The estimated rate of violent crime was 372.6 offenses per 100,000 people. An estimated 1,197,704 violent crimes occurred across the nation in total for 2015. There was a 10.8% increase in murder and non-negligent manslaughter when compared with 2014 estimates.

When a person is arrested, there is a specific series of events that follows. There are certain legal procedures that the police are expected to follow during, as well as after, the actual process of arrest. An arrest takes place when you are taken into custody by the police and is complete as soon as you, the suspect, do not have the freedom to walk away from the arresting officer.

Your Rights During an Arrest

In 1966, in Miranda v. Arizona, the US Supreme Court ruled that individuals who are arrested for being suspected of committing a crime have certain rights that officers must explain to them before they can be questioned. These rights are designed to protect a suspect’s Fifth Amendment right to be free from incriminating themselves and are read in a warning as follows:

Miranda rights should be read only when a person is in the custody of the police and under interrogation – this means that it would not apply to situations such as traffic stops.

If you are arrested, you should always remember that you have certain rights to protect yourself, regardless of whether you are innocent or guilty.

If you have been arrested, you should immediately seek the legal counsel of the experienced attorneys at the Law Office of Paul J. Donnelly. P.A. Call us at (305) 757-3331 and we will review your case and provide you with an expert criminal defense attorney to protect your rights.