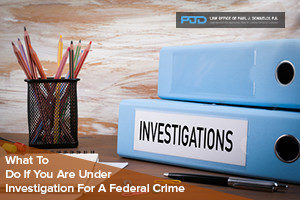 If you discover that you are a subject of interest in a federal crime in Florida or are being investigated, it is important that you act immediately by contacting an federal criminal attorney Miami who has experience in this legal area. Federal authorities come armed with a team of investigators and prosecutors, and they are dogged in their pursuit of those they believe to be guilty.

The fact is federal investigations of serious crimes can take years and can cost hundreds of thousands and even millions of dollars. After putting in so much time and effort and spending so much taxpayer money to build their case, the federal prosecution can be a daunting force to have to face in court. They are intimidating, experienced, and driven to win.

What Are Federal Crimes?

In the most basic sense, a federal crime and federal laws refer to any criminal activity that the national government sees as unlawful. In addition, crimes that occur on federal property are categorized as federal offenses.

Federal crimes can include:

It is specifically stated under federal law and in the U.S. Constitution that before a person can be brought before the court to face federal charges, his or her case must first be reviewed by a grand jury. If the grand jury finds that there is enough evidence against the plaintiff to warrant a trial, then that person is indicted and the formal trial process begins once the defendant is charged with their crimes.

Read: Is it fair to use a Seldom-Used Federal Charge?

If you are being investigated for federal crimes, the agency conducting the investigation will use its agents to gather evidence and coordinate the case that is brought before the grand jury.

Federal agencies that may be involved in such an investigation include the FBI, DEA, ATF, or Secret Service and others. The U.S. Attorney General oversees such cases and agents act under his or her direction.

What Does It All Mean?

A grand jury’s proceedings are quite secretive, and that is one reason why many people who are the subject of a grand jury investigation have no knowledge that the investigation and subsequent hearing is going on.

It’s important to remember two things about grand juries: you must take an indictment very seriously and an indictment does not mean that you have been found guilty. It does mean that you must hire a lawyer and have that lawyer fight for you in every way, including working to get your case dismissed before it ever goes to trial.

If you discover that you are the subject of an investigation in relationship to federal law or if you find that your case is being considered by a grand jury, contact the Best Criminal Defense Lawyer Near You in Miami at the Law Office of Paul J. Donnelly P.A.. We have extensive experience and success in representing defendants who are accused of federal crimes.

Contact us for a no-obligation review of your case now by calling 305-757-3331. Do not hire an attorney who lacks practical experience in the federal arena. This is a highly intimidating and specialized area of the law. Remember that we can help.