What Makes a Drug Charge a Federal Crime? 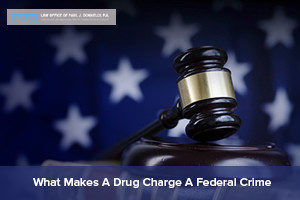 Being arrested with drugs or because of drugs typically results in a state conviction. But, there are instances where you could be charged with a federal crime, which severely changes the outcome of your case. Not only do federal charges come with longer sentences, but you may be sent to a prison far away from your family and face additional charges that the state would not impose.

So, what changes a regular drug crime into a federal offense? The answer is not that straightforward.

Drug possession is already a serious charge in the state. But, if you are convicted in federal courts, it comes with severe consequences (see how easy it is for the feds to charge you in this post). Most federal charges consist of possession with the intent to deliver or drug trafficking. The drugs that are typically involved in these types of cases include:

In order to be convicted of a federal drug crime, the United States Attorney’s office must present enough evidence to prove four key things:

What is the Punishment if Convicted of a Federal Drug Crime?

You could still face state charges in addition to your federal charges. Distribution could range anywhere from three to five years for a first offense for the state, but you could also face up to twenty years or a minimum mandatory five to forty years or a minimum ten years in prison if convicted of both. See what Miami’s Big Money Team is facing regarding their drug charges.

You Need to Speak to a Federal Crime Attorney

Federal crimes charges are very serious. Federal courts do not operate the same as state courts; therefore, you need an attorney that understands the federal court system and has experience representing individuals accused of drug crimes. Because the punishment is so severe for federal drug crimes, you cannot risk using any federal drug crime attorney in Miami.

If you have been arrested or you are being charged with a federal drug crime, contact the Law Office of Paul J. Donnelly today. We have years of experience handling federal drug crimes and can help represent your case in court. Call (305) 757-3331 now for a free consultation.