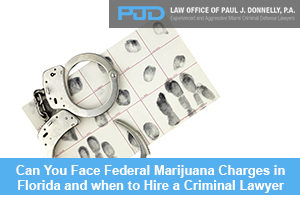 There is no question that the United States has come quite far in regard to marijuana laws in recent years. However, for those who are a fan of this plant, the situation of using it is a bit more difficult than they may think. While there are some states that are making the use of this plant legal, others are cracking down even more to keep it off the streets.

With marijuana being legal for medical uses in some places and not in others, and even being legal for recreational use in some states, it is difficult to know what can and cannot be done. As a result, many people are facing criminal charges for doing something they believed was perfectly legal. If you are in this situation, hiring a criminal lawyer is the best course of action.

In the state of Florida, the laws are pretty straightforward and easy to understand. Marijuana is not considered a legal substance. However, as of January 3rd of 2017, the use of marijuana for medical purposes was legalized.

Something that everyone must remember is that just because the state has said that the substance is legal, it is still a violation of federal law to possess marijuana. This is the case because of the Controlled Substances Act. If you have a situation where your case involves criminal charges with the state and federally, then you may discover that the federal government is going to try and penalize you for the possession of marijuana, even if you obtained it in a legal manner.

If you are facing this situation, then it is imperative that you contact a criminal lawyer for assistance as they will be able to help with both your state and federal charges.

Is the Government Actively Enforcing the Controlled Substances Act and why Criminal Lawyer’s Advice is Invaluable?

In most cases, as long as it is a minor infraction, the government will not enforce the Controlled Substances Act for marijuana. For example, if you only possess an amount of the substance that would result in a misdemeanor charge, then you likely won’t have anyone from the federal level looking into your case. However, if you are selling over 5,000 grams, and you are caught, you would likely be charged with a felony. At this point, the likelihood of a federal investigation is higher. In either situation, it is smart to hire a criminal lawyer for help.

The fact is that marijuana is an extremely controversial drug in the U.S. While there are a large number of people who want to have it legalized in the majority of states, this is something that has not happened yet. One of the best ways to avoid facing criminal charges and needing a criminal lawyer is to remain aware of the changes as they take place.

If you need help with a criminal marijuana charge, it is best to contact the team of criminal lawyers at the Law Office of Paul J. Donnelly, P.A. by calling 305-757-3331.

What are the Most Common Holiday Crimes at Shopping Malls in Florida?

Preparing to Testify in Your Criminal Trial: Understanding How the Process Works