Different Probation Violations That Can Land You Behind Bars in Florida 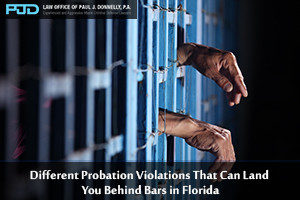 In the state of Florida, a violation of probation takes place when a criminal defendant willfully and substantially violates the conditions of a probationary sentence.

In Chapter 948, Florida Statutes, probation is defined as a type of community supervision that requires an offender to maintain certain contacts with parole, probation, community supervision, or other specified officers and to abide by certain terms and conditions that a court order provides. Probation is not considered a right but a privilege in Florida, and according to some Florida Supreme Court cases, it does not constitute a formal sentence.

Failed Drug Tests: A significant percentage of probation violations in the state are made up positive drug tests. In cases like these, the State has the burden of collecting suitable and substantial evidence to prove that an illegal drug was present in the body of a defendant. Prosecutors often underestimate this burden.

New Criminal Offenses: Law violations or new offenses during the supervision period are one of the most common types of probation violation in Florida. When the State wishes to revoke probation as a result of the commissioning of new offenses or crimes, it is required to present non-hearsay, direct evidence that links the defendant to the commission of the offense at issue. If the State is not able to do so, revocation is improper.

Failure to Complete Drug Treatment Programs: In the event of failure to duly complete a court-ordered program, the failure is deemed as a willful violation if it can be proven that the failure was the fault of the accused. This means that there must be some evidence to show that the defendant was responsible, in some way, for the failure to complete the program.

Additionally, the failure of a defendant to enter and complete a drug treatment program cannot be used as a basis for revocation when a period of time for entrance or completion has not been prescribed in the probation order.

Failure to Meet Financial Obligations: Another common basis for a probation violation in Florida is non-payment of court costs, costs of supervision, restitution, costs of drug testing, fines, and other fees. Naturally, this raises the issue of the ability and willfulness of the defendant to pay. Under Section 948.06(5) in the Florida Statutes, once non-payment has been established, the probationer has the burden to prove his inability to pay by clear and convincing evidence. However, this statute does not relieve the trial court of its obligation to make a finding of the probationer’s ability to pay.

Upon the revocation of community control or probation in Florida, the court can impose or issue any sentence that might have already been imposed during the sentencing of the offender. Therefore, the defendant could be sentenced up to the maximum penalty allowed for the original offense, but not in excess of that penalty.

For example, the statutory maximum penalty for a 1st time DUI is 180 days of jail time. An arrest for a DUI is also counted as a day served. If the accused is able to post a bond on the day of his arrest, a potential maximum sentence of 179 days remains. Therefore, under this scenario’s facts, a DUI probation violation will result in up to 179 days of jail time.

If you have been accused of violating misdemeanor or felony probation in Florida, you should immediately contact the Law Offices of Paul J. Donnelly, P.A at 305-757-3331. Probation violation proceedings can often be technical in nature which is why you should have our experienced and astute attorneys by your side so you can pursue all legal options available to you. We are available 24/7, call us today for a free consultation.