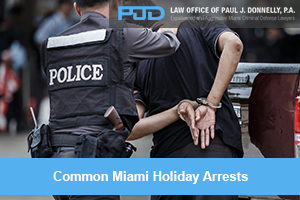 The holidays are a time when most people exchange presents and hang out with the people they love. There are usually quite a few parties during the holiday season, which can lead to a variety of problems. The more alcohol a person consumes, the higher the likelihood becomes they will be arrested. Unfortunately, arrests are quite common during this time of year. The arrests during this time of year can lead to a person getting a criminal record and having to suffer the consequences this will bring. Here are just some of the most common arrests that happen around the holiday season.

People Are Commonly Arrested For Trespassing during the Holiday Season

Nearly 95% of all criminal trespassing cases involve a person who has had too many drinks and is refusing to leave an establishment they are partying at. If the owner of the property no longer wants a person to be there, they have the right to ask them to leave. Refusing to leave an establishment when asked can lead to a Class A misdemeanor. There are a number of trespassing cases that involve people not adhering to the no trespassing signs a property owner has posted. Regardless of the circumstances surrounding a case like this, the punishment for trespassing can be quite severe.

Battery is Also a Common Arrest During This Time of Year

When a person has had too many drinks at a Christmas or New Year’s party, they may get a bit out of control. Generally, if a person is inebriated, they will be a bit more combative than normal. While you may think getting in a drunken skirmish is not a big deal, the law has a different point of view. Regardless of who is at fault for the drunken fight, both parties will usually be charged with battery. During this time of year, a number of battery charges are given to people who are combative during an arrest of another party.

In a drunk person’s mind, helping their friend is a noble act. Trying to fight a police officer in a fit of drunken rage will only make matters worse. The last thing you want is to be spending your holidays in a jail cell. By watching the amount of alcohol you consume, you will be able to stay in control and avoid legal problems in the New Year.

While drinking alcohol is quite common during the holiday season, there is a limit to the amount of spirits a person consumes. If a person has gone overboard with the alcohol and is unable to control themselves, then they may be arrested for public intoxication. If the behavior a person exhibits while under the influence of alcohol puts others in danger or lead to harassment, they can be arrested for public intoxication. As soon as you are arrested for this offense, the first call you need to make is a trusted lawyer. They will be able to give you information regarding what your rights are and what charges you are facing. Trying to get through a difficult process like this without the help of a lawyer will usually lead to even more problems. A lawyer will have no problem helping you with things like lowering your bond amount and other important details of your case.

If you have been arrested and need the help of a criminal defense attorney, contact the lawyers at the Law Office of Paul J. Donnelly, P.A. at 305-757-3331.

Criminal Law: What Is The Art Of Discrediting A Witness?