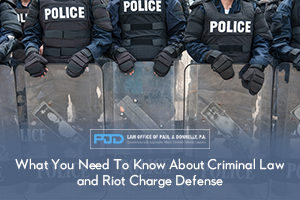 What happens when a peaceful protest turns into a riot that requires a massive police presence to restore peace?

In many instances, criminal law requires that the person or people responsible for triggering the disturbance are prosecuted with a charge known as “inciting a riot.”

And remember that you don’t have to actively participate in a riot to be charged with this crime, because encouraging others to do so is often enough.

There are several defenses, however, that you can use to counter an incitement to riot charge.

Mistaken Identity Is a Criminal Law Defense To Inciting a Riot

If witnesses claim they heard and saw you inciting people to riot, a common defense is to prove that those witnesses identified the wrong person.

This is easiest if you know the identity of the person who did incite the riot, because then you can make a direct comparison between yourself and that person.

But finding witnesses who will testify that you were present at the riot, but did not incite the riot can be an effective defense.

Proving Defendant Was Only Encouraging a Protest Is Another Defense

Another defense to a riot charge is that you while you were definitely a participant in the protest, the only action you took was to encourage others to be vocal in their protest.

This often relies on witness testimony to show the kinds of words you used and the actions you took during the incident.

However, the challenge with this defense is that during a protest, emotions run high, and there is a fine line between words that are meant to encourage protestors, and words that could step over the line into inciting violence.

In many instances, police are present at protests before these protests transform into riots, and they may accuse you of inciting a riot in their desire to blame someone for what happened.

If you can prove that the police intentionally accused you of inciting a riot out of some bias against your protest group, then you can lay the groundwork for a successful defense.

You Need An Aggressive Defense Lawyer

In these times of social protests and social unrest, being arrested on an incitement to riot charge can be very serious. This isn’t the time to play games with your freedom, so your best move is to hire an experienced criminal defense law firm such as the attorneys at Paul J. Donnelly, P.A. We pride ourselves on mounting strong defenses for our clients, and we have the resources necessary to ensure that every aspect of your case is investigated. Please call us today at 305-757-3331 to discuss your case and see how we can help you.