Search Site
Menu
Home / Blog / Criminal Law: What Is the Art of Discrediting a Witness?

Criminal Law: What Is the Art of Discrediting a Witness? 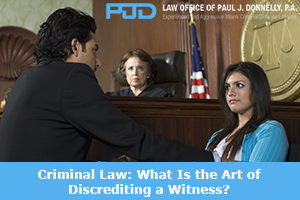 After you’ve been arrested and charged with a felony, you may have to go to trial if a plea bargain is not reached.

During a criminal trial, it’s common for the prosecution to call witnesses to testify against you, but it’s also common for your defense lawyer to cross-examine these witnesses.

And in criminal law, witness testimony can sway a jury against you, so your lawyer must know how to attack witnesses on your behalf.

Here are some of the most effective methods for defense lawyers to discredit a prosecution’s witness.

Common Ways To Discredit a Witness In Criminal Law

Every criminal defense lawyer has his or he own way of dealing with prosecution witnesses, but there are some common methods to weaken the testimony of a witness, including:

The Right To An Aggressive Defense

Regardless of the crime that you’ve been accused of, you not only have the right to a defense lawyer, you have the right to an aggressive defense team that will challenge every aspect of the prosecution’s case, including the credibility of the state’s witnesses. But you need a criminal law firm that has the all the necessary resources, and the team at the Law Office of Paul J. Donnelly, P.A. have the experience and the track record to give you a fighting chance. Please call us today at 305-757-3331 for a free legal consultation.