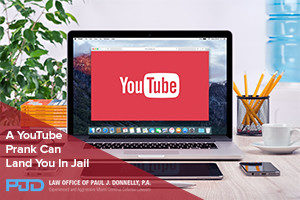 Social media has definitely changed the way people interact. A decade ago, you probably wouldn’t have dreamed of taking a photo of your dinner and sending it to a friend.

Today, people think nothing of sharing the most mundane, everyday aspects of their lives. Unfortunately, social media can also land people in serious legal trouble.

Criminal defense attorneys in Miami know how aggressively prosecutors pursue their cases. Don’t make it easier on them by posting evidence of your crime online for the world to see.

YouTube is a video-sharing platform that has been around for just 11 years, but has nevertheless managed to revolutionize the way people view and share video content.

If you grew up in a time before the internet reached widespread popularity, you probably remember when you had to actually be in front of your television to actually watch a program.

Since it launched, YouTube has become a powerful tool for marketing. It has created millionaires, pop stars, and even professional “YouTubers.”

The site is such a major player in marketing, social scientists and advertisers have begun studying why certain videos “go viral” and generate millions of views.

When a video goes viral, it spreads rapidly across multiple social media platforms, scaling over time and garnering more attention.

Because there is money to be made in viral videos, some people have begun posting content specifically designed to attract attention. In some cases, these videos have attracted the wrong kind of attention.

For a few video-makers, YouTube pranks have resulted in criminal charges. In London, four men were sentenced to time in prison for carrying out a fake art heist and provoking violence. One man involved in the scheme must serve seven months in prison.

In Australia, a group of men posted a series of videos purporting to depict a terror attack. As one might expect, the Australian police did not find the prank the least bit funny. The men were promptly located by Australian counterterrorism authorities and arrested.

In other cases, people have used social media to document their crimes and share them publicly. These incidents go beyond pranks in that the intent is malicious from the start.

In Britain, lawmakers have proposed stricter sentences for people who share videos of criminal acts online.

Recently, two teenage girls were sentenced to life in prison after they posted a video showing them attacking and murdering a woman in her home. The teens involved in the attack were just 13 and 14 years old at the time of the murder – barely older than YouTube itself.

Don’t Go It Alone in a Criminal Case

If you are facing criminal charges, you need the help of an aggressive criminal attorney in Miami. Most likely, the police don’t have a video of you committing a crime.

Even without such compelling evidence, you may be facing an uphill battle in your case. It is extremely important to work with a lawyer who understands the criminal justice system and what it takes to prove your innocence or minimize the severity of the charges against you.

If you have been charged with a crime, you need a Miami criminal defense attorney working for you as soon as possible.

The prosecutors are already working hard to prove their case. You have no time to lose in preparing your defense. Get started on a defense strategy in your case today.