The Scientific Strategy Behind Your Criminal Defense Case 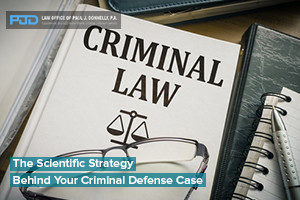 You may have watched television shows such as “CSI” and “Law and Order” and have seen and learned a little bit about the use of advanced science in criminal defense cases.

However, that is what television looks like and many of the things you see on television do not occur in real life.

But here are some examples of how science plays a critical role in your criminal defense case:

Accurate Data: There are some forensic disciplines that offer accurate data. With that being said, the quality, interpretation, and evaluation of the evidence are still significant to its outcome.

DNA evidence, however, has a hard science behind it. Toxicology evidence is also helpful in a criminal case, if handled efficiently.

Stored Evidence: A criminal defense lawyer has to deal with all aspects of DNA when evidence is collected on time and effectively stored.

However, when fingerprints, for example, are admitted as partial evidence, this results in a fortuitous relationship. With no clear standards of interpretation and lack of training, evidence could prove to be less than meaningful.

When done right, though, the importance of statistical evaluation will play a key role in a criminal defense case.

DNA Profiling: DNA has proved to be effective in helping to prove whether a suspect is guilty or not. In fact, though DNA was not part of the process decades ago, as technology advanced, many prisoners have been released as a result of the introduction of DNA profiling.

Be aware…With expert testimony explaining such evidence and aggressive legal representation from a criminal defense attorney, many suspects has been found not guilty of the alleged crimes.

Standards of Admissibility: The court system in a criminal case uses two standards of admissibility to handle scientific evidence. Those are the Daubert and Frye standards.

In the Frye standard, scientific evidence is admissible when the court agrees that it is sufficient to establish that it falls in the specific field of science. The Daubert standard is admissible when it has been proven valid and reliable.

The only instance where DNA evidence is not accepted by the courts is when the methods used to interpret a profile has not been proven to be reliable or valid.

However, if proper DNA analysis has been performed, DNA profiling is the science that has proven to play a critical role in a criminal defense case and forensics.

Working with an Experienced Criminal Defense Law Firm in Miami

A criminal defense lawyer will review all the evidence against that charges against you and prepare a solid defense strategy accordingly.

When disputing against solid scientific evidence, this may often involve working with and hiring expert witnesses in order to testify against evidence, which may prove to be elemental in a case.