Search Site
Menu
Home / Blog / You’ve Been Charged with DUI; What Do You Do Now?

You’ve Been Charged with DUI; What Do You Do Now? 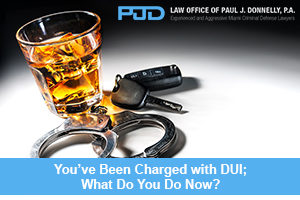 If you have been charged with Driving Under the Influence (DUI) then it’s natural to wonder what to do next. If it’s something you haven’t gone through before, the next steps can seem confusing and a little bit scary.

Every year roughly 1.5 million arrests are made for drunk driving. What are the first things you should do if you’ve been charged with a DUI?

As soon as you can, write down everything you can remember from the events preceding you getting pulled over and every detail from the stop itself. Try to remember everything the police officer said to you and what you said to them. Your memory of the night will fade as time goes on, so it’s important that you mark down every detail while you still remember them.

The details of your traffic stop are very important and your entire case will likely hinge on them.

Find and talk with everyone you were around or talked to on the night in question, especially if they saw you right before, during or after your traffic stop. Make a record of what they say and see if they would be willing to testify in court on your behalf.

Lock Down Your Online Information

In the era of the Internet and social media, there is a record of a lot of your activity online. From Tweets to Instagram selfies to Facebook live streams, for many people there is a ton of information about what they are doing and when they are doing it. This has led to many in law enforcement scouring the Internet for any evidence that can be used against a suspect, especially if that evidence chronicles what was going on the night you were pulled over for DUI.

Things taken out of context can be used against you, so make sure your social media accounts are marked private and posts are hidden from public view.

While it may seem like you can handle things when it comes to your DUI – especially after the initial shock of your stop has worn off – you still need someone with experience by your side who is going to fight for your constitutional rights. You can be sure that the prosecutor handling your case will have plenty of resources at their disposal, including testimony from the officer or officers who pulled you over. You need someone with experience in DUI cases by your side, someone who can talk to your witnesses and make sure you are defended ably.

If you have been charged with a DUI and need an experienced attorney, contact The Law Office of Paul J. Donnelly, P.A. or call 305-757-3331 for a free consultation today.

Can You Be Arrested For DUI If You Aren’t In The Vehicle?

How To Avoid A DUI Charge In Miami