Search Site
Menu
Home / Blog / Will My Juvenile Charges Follow Me as an Adult?

Will My Juvenile Charges Follow Me as an Adult? 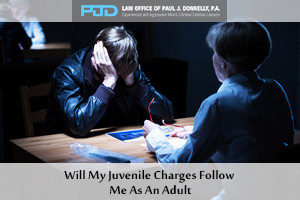 Things that take place in juvenile court do not necessarily stay there. When a teenager has a delinquent record, it can follow them throughout their lives. So making a mistake as an unruly teenager can follow and impact your adult life.

When a teenager goes through the juvenile system, their criminal record can consist of:

In many cases, the juvenile with no further adjudications is entitled to expunging their record. However, not many people solicit the help of an attorney for this process, and so no petition is made to the court for expunging the juvenile record.

Once a juvenile has been criminally charged, their record can follow them well beyond when their sentence has been completed and they think they can put it all behind them.

With a criminal record, a juvenile might find it difficult to locate a job and keep it. A delinquent teen may also have a hard time obtaining a loan, going to school, and getting credit. It is best to work with a lawyer to have a criminal record obliterated.

The record expunging process is slightly different for juveniles than for adults. However, a juvenile’s criminal record can be expunged with the help of an experienced attorney.

There are many benefits for seeking legal counsel to expunge a juvenile record. When the record is expunged, it allows the teen to successfully complete all the supervised conditions of rehabilitation through the court system.

That means the teen gets a new lease on life and is able to move forward to a more productive way of living, contributing to society in a positive way without the encroachment of a juvenile record.

Many families are not aware of the impact of a juvenile record on a teen’s life. Even though it may not be a conviction, the disposition of delinquency sets the trend for being suspect in future delinquencies. In other words, there are subsequent consequences to having a juvenile record.

The court may use a ‘prior record’ to determine the basis of sentencing another delinquent act by the same juvenile.

With this point system structure, the incarceration periods could be quite longer. Employment opportunities may also be lost as potential employers will do a background and fingerprint check to find a juvenile record that is not expunged. In addition, a criminal juvenile record may disqualify someone from getting into the military.

Other consequences that a juvenile with a record may face can include:

Be aware that in some cases, the juvenile may face the possibility of deportation if they have an immigrant status in the United States.

Juvenile delinquency can come back to haunt the teen in the form of a criminal charge as an adult. If restitution and court fees have not been completely paid when the case is closed, it leaves room for a judgment to be filed against the teenager in the future.

This, of course, reflects negatively on the person’s credit rating and other areas of their lives. Therefore, it is in a juvenile’s best interest to seek the legal counsel of an attorney to get the record expunged. It is best to do this sooner rather than later.

If you have been charged as a juvenile and your case has been closed, you should have the record expunged. To do so, solicit the legal assistance a seasoned legal professional regarding your situation. Contact us today at 305-757-3331.