What You Need to Know about Drug Arrests in Miami 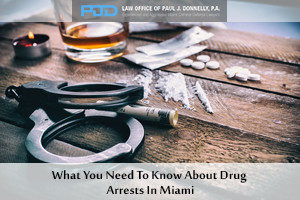 In Miami, Florida, drug crimes are normally handled with utter seriousness. Florida’s mandatory drug laws are known to be the harshest in the country.

Most people consider Miami to be the world’s capital for illegal drugs simply because of its access to waterway.

If you are faced with a drug charge in Miami, whether it is possession of drug paraphernalia or possession with intent to sell, you need to have a drug defense attorney by your side.

Even though being arrested and indicted with drug possession is a less serious drug charge, it still remains to be a serious crime, with far-reaching consequences.

If you are caught in possession of any illegal drug, it will be considered drug possession, provided that the amount of the drug is not more than a level that constitutes “personal use”.

Even if authorities strongly believe that the amount of drugs in your possession translates to a much more serious crime, our experienced drug crime lawyer may be in position to convince the courts otherwise.

What Are the Penalties?

Throughout the State of Florida including Miami, the penalties for drug possession mainly depend on both the type and amount of drugs in your possession.

Additionally, previous criminal record and the circumstances of your arrest play a huge role in the prison time and penalties you may face.

For those who are found in possession of small amounts of marijuana, however, the crime is considered a misdemeanor.

Any person in possession of a controlled substance with an intention to sell, deliver, or even manufacture that substance might be charged with a drug sale.

Unfortunately, you don’t have to be caught in the act of selling the drugs. For example, a hand-to-hand transaction can still get you arrested. Simply being in possession of large quantity of drugs in your car, or even in your apartment, or possessing a particular amount of drugs individually packaged is sufficient evidence for the police officers to increase the charges to drug sales.

If charged with drug sales, then you are more likely to face a second-degree felony, which carries a punishment of up to 15 years in state prison.

This particular crime is taken very seriously in Florida. Based on the amount of drugs in your possession you can easily be indicted with drug trafficking and face hefty minimum mandatory prison sentences, accompanied by long prison sentences.

An individual convicted of drug trafficking is likely to face a fine of up to $200,000. Cannabis and Cocaine are the most common drugs trafficked in Miami.

If found in possession of 28 grams or even more, but less than 200 grams you stand to face a mandatory prison sentence of not less than 3 years.

If found in possession of 200 grams or more, but less than 400 grams, you stand to face a mandatory prison sentence of not less than 7 years.

If found in possession of 400 grams or more, but less than 150 kilograms then you stand to face a mandatory prison sentence of not less than 15 years.

For those that are caught with more than 150 kilograms, face life in prison.

Drug trafficking is normally considered as a first-degree felony. Depending on the quantity and amount of drugs in one’s possession, mandatory sentences can be stretched to life in state prison.

If you or your loved one has been arrested and indicted with a drug crime in Miami, or anywhere in Florida, it is vital to retain the services of a highly skilled and experienced Miami drug crime lawyer.

Call the Law Offices of Paul J. Donnelly today at (305)-757-3331 for an absolutely free and confidential review of your case.