3 Reasons Why Your Drug Arrest is a Felony 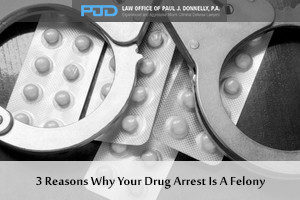 If found in possession of “illegal drugs,” one may either be charged with a misdemeanor or a felony, which is a more serious charge. The choice of the prosecutor will hugely depend on the type of drug involved (in some cases, possessing a specific type of drug will inevitably lead to felony charges).

The circumstances of that particular crime will equally play a role when “aggravating situations” are present. For example, being in possession of illegal drugs on school grounds, the possibility of a felony charge is extremely high.

Factor #1: The Amount and Type of the Drug

Felony charges for drug possession are often as a result of possessing a specific illegal substance, or even any illegal possession of a particular quantity of the stated drugs. For instance, in most states, being in possession of any amount of heroin is a felony.

Factor #2: Possession either with Intent to Sell or for Personal Use

An individual possessing drugs for personal use will usually incur less severe charges than the one possessing with the intent to sell. The difference in penalty clearly reflects legislators’ view of the damage caused by each crime: Drug users are normally the victims of those selling them. A user harms himself but a seller harms many people.

However, possession is still a crime. In fact, mere possession of trifling quantities can lead to a felony charge in states that have strict drug possession laws. And states that are tolerant, when extremely dangerous drugs are involved, for example cocaine or heroin, felony charges are possible.

Also Read : Why is My Drug Arrest a Federal Crime?

Additionally, in many other states, if an individual is caught with huge amounts of illegal drugs, then he or she is more likely to get charged with illegal possession of drug with the intent to sell, since it is not likely that they intended to use the whole amount for themselves. Because the sale of illegal drugs is a much more serious crime, possession with the intent to sell is nearly always a felony.

In most states, prosecutors may end up charging an offender with a felony if the desecration involved one or even more “exasperating situations,” even when the drug possession in question would have possibly been a misdemeanor. The choice of these factors clearly reflect legislators’ feelings that crimes happening under these circumstances are possibly much more damaging–for example when drugs are being sold to or around children—than when these factors are not present.

Each and every state has clearly listed its exasperating factors in the drug possession laws. These lists always include but are not restricted to the following kinds of possession:

Have you been arrested or is your loved one arrested and charged with possession of illegal drugs and are facing felony criminal charges? Immediately get in touch with the Miami criminal attorney Paul J. Donnelly at Law Office of Paul J. Donnelly, P.A. and we will be able to assist you defend your case. We will keenly assess the strength of the evidence against you and also evaluate any possible defenses.