What Crimes Are Common in Miami? 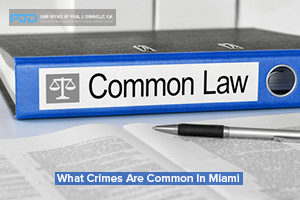 The most violent and horrific crimes often make the news, but these crimes are very rare compared to many other more commonplace crimes.

Criminal defense lawyers in Miami are far more likely to see burglaries, theft, or other property crimes than assault and battery, murder, or rape.

In Miami, the three most common crimes are motor vehicle theft, burglary, and regular theft.  According to FBI statistics, the City of Miami had over 22,000 property crimes in 2012, including 15,305 larcenies (theft), 4,355 burglaries, and 2,711 motor vehicle thefts.

By comparison, there were only 4,856 violent crimes, and of those only 69 murders or voluntary mans laughter’s, 65 forcible rapes, and 2,096 robberies. So while violent crime grabs the headlines, there are about five times more property crimes in Miami and in most other cities.

What Exactly do These Common Miami Property Crimes Mean?

Under the law, there are usually specific elements that must be met for a prosecutor to meet their burden of proof. The specific elements vary from state to state. For example, some states call most property offenses theft rather than breaking them up into different offenses.

1. Breaking into a building or structure (there are different types of burglary depending on the structure that is entered, from homes to business, cars, boats, or other facilities),

3. The building must be someone else’s property (that includes rented property, so if a tenant is living in a building, the landlord cannot just break in and enter even though he owns the property. What matters is who is regularly using or occupying the property),

4. With the intent to commit a criminal offense inside the building, structure, or dwelling.

In short, burglary generally means that you break-in and enter into a dwelling or structure with the intent to commit some sort of crime once inside.

Theft consists of a handful of different elements under law. First, there must be a “taking” which means that the suspect has to obtain control of an object. Second, the object has to be carried away.

Third, the object taken must be a piece of personal property. Sometimes, courts will refer to this as a “tangible personal property” requirement meaning that the property has to be physical property, like furniture or computers.

Under Florida law the amount of property taken impacts the specific charge. For example, Petty theft involves property under $300 while Grand Theft is stealing property over that amount.

Motor vehicle theft is essentially a more serious version of traditional theft, and is charged as a felony. Alternatively, other theft charges can be either be a misdemeanor or felony depending on the value of the object that is taken.

Still Have Questions about Crime in Miami?

The law around property crimes, as well as every other type of crime, can be complex.  For personalized guidance and advice contact the experienced Miami criminal defense attorney at Law Offices of Paul J. Donnelly, P.A. 305-757-3331.