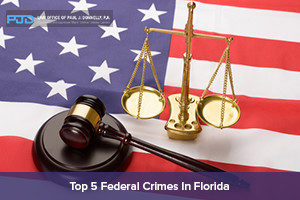 Federal crimes are easily misunderstood. And, many individuals are shocked to find that their arrest turns into a federal charge. In order for a crime to be defined as a federal offense, it must meet the terms of United States Code, Title 18. In Florida, some federal crimes are more common than others.

Drug trafficking is a crime involving taking drugs from one country into or out of Florida or another state within the U.S. While sometimes this is done intentionally, it could also be accidentally. For example, the state you come from legalized marijuana, but you brought it a state that considers it an illegal substance. You are not only arrested for possession but could be charged with trafficking.

Tax evasion, fraud, and/or failure to withhold taxes from an employee’s paycheck are all federal crimes. Tax evasion does not mean ignoring your tax return or failing to pay a bill – and those who commit tax evasion and fraud are often aware of their actions.

Another common federal crime in Florida is crimes involving the United States Postal Service. This can include soliciting fraudulent funds via mail, sending ransom notes, shipping illegal drugs in or out of the state, or mailing toxic substances prohibited by the USPS mailing guidelines.

Identity theft is on the rise, and it is also a common arrest in Florida. If you use someone else’s identity for fraudulent purposes, including stealing the person’s identity or even accessing their bank accounts to take funds, then you could be charged with a federal crime.

Healthcare and Medicare fraud are increasing in Florida as well as the rest of the country. The federal government takes these crimes very seriously and often can accuse physicians as well as other professionals of fraud – even though they did not commit it.

If you are arrested and charged with a federal crime, then you need to contact a federal criminal attorney in Miami, FL right away. The Law Offices of Paul J. Donnelly, P.A. can help you with your federal case and we will provide aggressive representation and ensure your rights are protected.