Tax Avoidance vs Tax Evasion: Are You Committing a Crime? 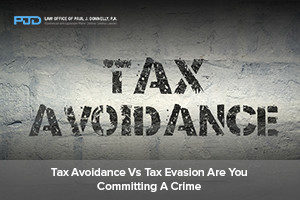 The difference between the two is clear and typically not tough to prove in a court of law. As a citizen of the United States, you have an obligation to file taxes without evading taxes or committing an illegal act to avoid a claim.

The Definition of Tax Avoidance

Tax avoidance is perfectly legal and involves using the tax system to reduce the amount owed in taxes. The United States Supreme Court stated about tax avoidance, “The legal right of an individual to decrease the amount of what would otherwise be his taxes or altogether avoid them, by means which the law permits, cannot be doubted.” Another term for tax avoidance is tax minimization.

Perhaps one of the most popular examples of tax avoidance is the common practice of corporations moving their funds to a country with a lower income tax rate.

For instance, Google offshores their revenue and avoids billions of dollars in global income taxes they would pay. They shift their money to countries like Bermuda, Ireland, and the Netherlands. This is tax avoidance which was reportedly audited by the IRS and deemed legal according to existing tax laws.

Personal tax avoidance includes popular methods like contributing to your IRA in order to lower your taxable income, learning about and qualifying for tax credits, and even deducting expenses used along with your investment activities. As long as you are honest and follow the tax code, personal tax avoidance is a legal activity.

Tax Evasion is Not Legal

Tax evasion is not legal and the line between avoidance and evasion is usually quite clear. Popular types of tax evasion often indicate a clear intention to knowingly underpay in taxes.

Common schemes of tax evasion are claiming false deductions, deliberately under reporting or leaving out income, and hiding or transferring assets or income.

Even without legal experience, most people understand the difference between tax evasion and tax avoidance. Hopefully, your accountant is an expert in tax avoidance, but does not specialize in tax evasion!

If you are worried about your own tax history or the history of your company, schedule an appointment with our team of legal experts. Miami Criminal Defense Lawyer, Paul J. Donnelly, P.A. specializes in criminal defense including tax evasion cases. We are available online or by phone at (305)-757-3331. We are available for a free consultation today.

By Paul Donnelly | Published May 6, 2015 | Posted in White Collar Crimes