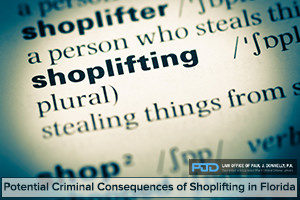 If you are caught shoplifting in Florida you will face serious criminal penalties, which may include fines and time in jail. Additionally, shoplifters are often sued for damages in civil court by the victimized merchants.

Laws Related to Shoplifting in Florida

In Florida, shoplifting is called retail theft. The theft can occur in several ways, which include:

Any merchant who has probable cause that a person has committed an act of shoplifting can legally detain the individual in a reasonable way for a reasonable period of time to prosecute the suspect or retrieve the goods. The civil and criminal penalties for shoplifting can be found here.

Criminal Penalties for Shoplifting in Florida

The following penalties apply when you are caught shoplifting in Florida:

Civil Penalties for Shoplifting in Florida

A written demand has to be made by the merchant, and if the shoplifter responds to this and pays the damages within a period of 30 days they will be released from any liability.

If you are arrested for shoplifting in Florida, you should consult a criminal defense attorney for help. They can review your case and help gather potential evidence to prove your innocence, as well as ensure your rights are protected. To learn more, contact the attorneys at the Law Office of Paul J. Donnelly, P.A. by calling 305-757-3331. Being informed and having someone protecting your rights can be invaluable when facing any criminal charges in the state of Florida.