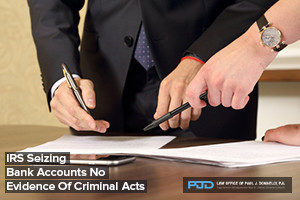 You may need a Miami criminal lawyer even if you have not been charged with a crime. This is because, as it has been widely reported in the news, including the New York Times, the Internal Revenue Service has seized the bank accounts of citizens who have not committed crimes nor have they engaged in criminal activities.

Over the past few years, the IRS has been targeting innocent citizens, taking their money, and holding it while they investigate possible crimes.

Much of this activity is related to The Bank Security Act, which demands that financial institutions report deposits of $10,000 or more made by individuals. Banks may also report smaller deposits made in an irregular manner.

The idea behind reporting the latter is that the depositor is making smaller deposits in an attempt to get around the Bank Security Act. Such a report made by a bank to the IRS is enough to induce the IRS to seize an individual’s bank account. There are over 700,000 such reports made by banks each year.

Even though no criminal activity has occurred, the IRS has been taking the money in citizens’ accounts and holding it while investigating any possible wrongdoing.

Utilizing the Civil Asset Forfeiture Reform Act of 2000, under which the agency may take control of the bank accounts and assets of those who are suspected of drug trafficking, terrorist activities, and other illegal actions, the IRS may hold your funds for an indefinite amount of time.

If this happens to you, or if in any other manner your rights are infringed upon by any government agency, and you are in the local area, it is important to contact a Miami criminal lawyer as soon as possible.

The fact is this type of action by the IRS is responsible for driving innocent citizens into debt, filing bankruptcy, and seeing their lives irrevocably altered. Getting legal counsel involved immediately is essential when dealing with an agency as powerful as the IRS.

If the IRS is Wrong

If the IRS confiscates the cash in your bank account and they find that there has been no criminal activity, you might expect them to return your money with interest. But that’s not what happens. According to the New York Times, the federal agency will often negotiate with the individual and return only some of the seized funds.

Often those who have had their money confiscated will accept the offer in order to end the investigation and move on with their lives. In 2012, the agency made 639 such seizures, but ended up pursuing criminal charges in just 20 percent of the cases. In the meantime, more than 500 people were unable to live their lives normally despite the fact that they had done nothing wrong.

Do Not Go It Alone

If you discover you are the subject of a criminal investigation, whether or not your bank accounts have been seized, contact the criminal defense lawyer Miami at the Law Office of Paul J. Donnelly, P.A. Our attorneys work tenaciously to make sure that all of your rights are preserved and that you receive every benefit that the law affords you.

Do not try to fight an IRS seizure on your own. Get help from the legal professionals who are experienced and knowledgeable in dealing with serious state and federal charges.

At the Law Office of Paul J. Donnelly, P.A., we are successful in defending those who have been charged with and are suspected of criminal activity. We understand what is at stake, and we know what it takes to win.