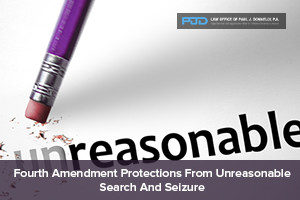 The Fourth Amendment of the American Constitution provides protections from unreasonable searches and seizures. Seizures include any arrest or detention by a government agent – basically any police officer.

The Fourth Amendment protects private citizens from government intrusion. The law protects individuals from being harassed by the police or other government officials in their homes or from being detained improperly. The Constitution requires police to properly arrest or detain individuals based on appropriate facts or probable cause.

An arrest is a police detention when a person is taken into custody against his or her will for the purpose of criminal prosecution or interrogation. To arrest someone, a police officer must have probable cause.

Probable cause is a type of reliable evidence based on facts or knowledge that would lead a reasonable person to believe that the individual under suspicion either committed or is committing a crime at the time of arrest.

Other Types of Detention

Investigatory stops, also called “Stop and Frisk” detentions, are another type of detention. These types of detention are controversial and have been all over the news recently. Some cities, such as New York City, have been accused of racial profiling in their stop and frisk tactics in recent years. As a result, the city has revised its policies.

Stop and frisk searches require a reasonable suspicion of criminal activity that is supported by articulable facts. Additionally, if the police reasonably suspect that the detainee is armed and dangerous, they may frisk the individual for weapons.

Stop and frisk stops, or investigatory stops, are not subject to any particular time limit. The police must act diligently and reasonably in investigating suspicious activity. The police may ask the detainee for basic information, such as his name. If the detainee refuses to cooperate at all, then the police may be allowed to arrest him.

To stop a car, the police must have reasonable suspicion to believe that the law has been broken. An automobile stop is considered a seizure because it is against the will of the driver and the passengers of the car.

So, a passenger has a legal right, or standing, to raise a wrongful stop as a Constitutional violation, which would require a court to exclude evidence found during the car stop.

Contact the Law Office of Paul J. Donnelly, P.A. at 305-757-3331 to discuss about your criminal case. Our professionals defense attorneys will help you throughout the case and protect your rights. We are serving in Miami & throughout the state of Florida.