Driving Under the Influence in South Florida 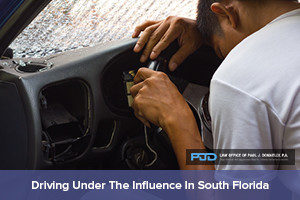 So many have unfortunately been in the situation of having too much to drink, and then making the poor decision to get behind the wheel and drive home.

In Florida, a driver 21 or older with a blood alcohol level of 0.08% can be charged with a DUI, and a driver under 21 can be charged if their blood alcohol level is .02% or above (commercial drivers have a threshold of 0.04%). It is important to know the consequences of a DUI. As with any charged offense, you are entitled to due process and should have trusted defense counsel on your side.

Consequences of a DUI

Driving under the influence in the state of Florida will result in significant jail time as well as fines and penalties. Naturally, the time behind bars and financial hit a defendant convicted of DUI will take will depend on a judge’s discretion in assessing the severity of the case and any extenuating or other circumstances, but state law provides for a range on each. The breakdown of consequences for each offense is as follows:

Third Offense (within 10 years from prior conviction)

– Up to 5 Years in Jail
– Up to $5,000 in fines and penalties
– Mandatory use of an ignition interlock device

Third Offense (more than 10 years since prior conviction)

Fourth Offense and Beyond (regardless of timing)

Jail time and penalties will be even greater if the driver’s blood alcohol level exceeds .15, or if there is a minor in the car while they drive under the influence (based on the normal thresholds, such as 0.08 for a regular driver over age 21).

Consequences for Your Driver’s License

There are also consequences beyond jail time and financial penalties that a guilty DUI defendant must bear. These pertain to the offender’s driver’s license, as well as future mandatory actions the person must take if they wish to drive again. These consequences are broken down by each offense:

Second Offense (within 5 years from prior conviction)

Third Offense (within 10 years from prior conviction)

Fourth Offense (regardless of timing)

Florida law provides for a “Lookback Period,” as can be seen in the above list of consequences. Courts will “look back” and take into account how long ago a prior DUI was in ascertaining the penalty for the present conviction.

Furthermore, every DUI offense in Florida requires that the offender use an interlock ignition device that requires that a person convicted of a prior DUI breathe into the device to demonstrate he or she is not above the legal limit to drive. The car will not turn on unless that person’s blood alcohol content is low enough.

Visit or contact Paul J. Donnelly, P.A. at 305-757-3331 to discuss about your rights and case. Serving Miami & throughout Florida.