Florida to Ease Up on Marijuana Use in South Florida 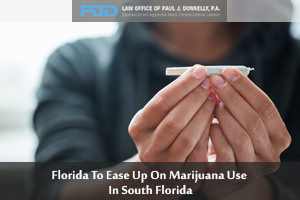 On August 26, 2015, news broke in the press that the Florida legislation was approved for the marijuana initiative, which has been ongoing for years. Of course, this news must have pleased all the advocates of the initiative who have been fighting for this, but it still seems that there is much more work to be done.

Now that advocates have gotten an approval, the campaign can begin with the acceptance of signatures for this marijuana initiative. During a similar campaign in 2014, many people learned that in the state of Florida, it would require many signatures to reach this initiative, which would be significantly more than what is needed in other states.

However, with all of that being said, it is seems to be a worthwhile undertaking and effort for so many people, especially those in the medical marijuana community. This marijuana initiative would serve to legalize marijuana possession of up to an ounce for individuals over the age of 21. It would also be legal to cultivate up to 6 marijuana plants in each household.

The title of the ballot was the regulation of marijuana in a similar manner as alcohol was to ascertain age, licensing, and additional restrictions. The ballot summary indicates that there will be a distinct regulation for limited use and cultivation of marijuana or cannabis as it would now be termed.

Be advised…For individuals over the age of 21, the state will adopt certain directives to issue, renew, defer and repeal licenses specifically for the cultivation of cannabis, manufacturing of any related products, testing or sale in any retail facility.

The initiative allows local governments to vote for the prohibition or regulation of facilities to do any of these things, if the government at the state level fails to act on time. The initiative does not allow the cultivation of industrial hemp nor is it immune to the violations of federal law.

The Constitutional Amendment for the Florida Cannabis Act states that in the interest of improving the efficient use of resources used by law enforcement, fostering the individual freedom of residents and to boost the revenue for public reasons, the state of Florida has agreed that as long as someone is over the age of 21, they should be allowed the legal use of cannabis.

The Same as Alcohol

This is to be done in the same manner it was done for alcohol. What does that mean? For alcohol initiative, individuals over the age of 21 could make a legal purchase as long as proof of age is shown. The same is true for cannabis. It will remain illegal if this product is sold to minors under the age of 21.

Be aware…Impaired cannabis users should not drive or will be considered under the influence of a substance and this is illegal as it still is for alcohol as well.

Only those with a license to sell cannabis will be able to conduct business. However, the cannabis has to be labeled and is subject to other state regulations in order to make sure that consumers are protected and informed.

The residents in the state of Florida agree that there are still conditions to be met to ensure the fairness and consistency of applying the law to this new initiative and for that reason; it is fair that other concerns need to be ironed out and properly documented.

For more information about the new cannabis initiative in the state of Florida or if you have been arrested for the possession of marijuana and need legal representation, contact a criminal attorney in Miami to discuss details of your case or to answer pertinent questions and concerns.