Domestic Violence Charges: Can I Go To Jail? 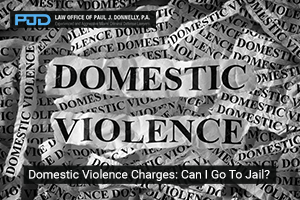 Domestic violence is something that most people can describe but is much more difficult to define in legal terms. And as a result, people accused of this crime are often at a loss as to whether they can actually face jail time for an incident. First, it’s important to understand there is no criminal charge known as “domestic violence.” If you’re arrested in a domestic dispute, you will likely be charged with battery, assault, stalking or kidnapping, depending on the circumstances.

However, any violence that occurs between members of the same household will have a domestic violence component attached to the charge, which makes the charges more serious. People arrested for charges related to domestic violence often ask the question: Can I go to jail? The answer is “yes,” but only in certain situations.

If you are arrested on charges related to domestic violence, and the victim shows signs of ‘bodily harm,’ Florida law requires that you spend a minimum of 10 days in county jail if you are convicted.

The problem is that there is no specific definition of ‘bodily harm,’ so this is often left to a judge’s discretion, but any evidence of bruises, cuts or scrapes may compel a judge to determine that you inflicted bodily harm.

Jail Time Prior To Your First Appearance Before a Judge

When you are arrested for domestic violence in Florida, you are not allowed bond (bail) until you face a judge at your first appearance. As a result, you will spend time in jail until your first appearance, which by law is supposed to be 48 hours. But there have been cases due to a crowded court docket, in which defendants accused of domestic violence related charges have waited longer than two days to see a judge.

At your first appearance, you can also expect the judge to order you not to have any contact with the victim, which means if you share a residence with the victim, you cannot go there after you make bail.

However, you can petition the court to modify this order if you can prove that you have no other place to stay, but the modification usually contains strict instructions that prevent you from having any hostile contact with the victim.

The Importance of Hiring a Criminal Defense Lawyer

An assault charge related to domestic violence can be very serious, and without the help of an experienced criminal defense lawyer, you may be facing jail time. The lawyers at Paul J. Donnelly, P.A. have handled many of these types of cases, and they are experts at pursuing an aggressive defense on your behalf.

Please call 305-757-3331 and take advantage of our free legal consultation to see how we can help you mount a strong defense.