How Battery Is Related To An Assault Charge 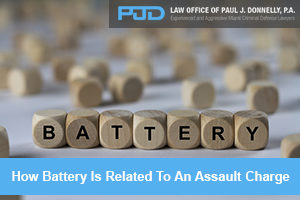 You often hear the term ‘assault and battery,’ as one criminal charge, but the truth is that these are two separate criminal charges. In many states, an assault charge is defined as the threat or intimidation of bodily harm to another person. That means that a defendant doesn’t need to physically strike a victim to be charged with assault.

Typically, there are two main elements in an assault charge:

It’s important to remember that simply threatening a person without an accompanying threatening action toward that person is not considered an assault.

What Is Battery and How Does It Relate To Assault?

A battery charge is different from assault because with a battery the defendant actually touches or strikes the victim. In most states, the battery is defined as the unwanted and offensive touching of another person, even if that touching does not cause harm or injury.

Typically, there are three main elements in a battery charge:

In many instances, a person who threatens to inflict bodily harm on someone and then makes unwanted contact with that person is subject to an assault and battery charge.

The simplest way to think of this is to remember that a battery charge is added to an assault charge if the defendant followed through with their intent to harm the victim by making contact with the victim. However, it is also important to remember that defendants may be charged with assault, or with battery, without the two charges being added together. And in many states, an assault and battery charge may carry more severe penalties than a single charge of assault or a single charge of battery.

An assault and battery charge can be very serious depending on whether you used a weapon or the extent of injuries to the victim. That’s why it’s vital that you secure the services of an aggressive defense lawyer that will seek to question every aspect of the state’s case against you. While there are no guarantees in criminal defense, an experienced law firm can make sure that police did not violate your rights. If your lawyer finds evidence that your arrest was not lawful, it can significantly damage the prosecution’s case against you. Please call the law office of Paul J. Donnelly, P.A. at 305-757-3331 to schedule a consultation, and to find out how we can put our experience to work for you.

Your Son Has Criminal Charges In a Fistfight. What Do You Do?