Search Site
Menu
Home / Blog / Your Son Has Criminal Charges In a Fistfight. What Do You Do?

Your Son Has Criminal Charges In a Fistfight. What Do You Do? 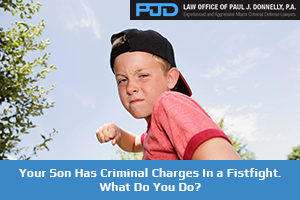 Newspapers are filled with stories of underage boys who got involved in an altercation that lead to a fatality and criminal charges.

And what’s worse is that in many of these instances the person responsible for the other person’s death did not intend to take things that far.

If police have arrested your son for hitting another person in a fistfight and he is facing criminal charges, what’s the first thing you should do? And how does that choice affect the rest of the legal process?

Secure a Lawyer When Your Minor Son is Facing Criminal Charges

The first thing you must do is to hire a qualified personal injury lawyer to defend your son after he has been criminally charged for his involvement in a fistfight.

Depending on the severity of the fight and the injuries suffered by the person your son got into the fight with, your son could be charged with a misdemeanor or a felony.

However, it’s important to remember that your son has the same rights as an adult when he is taken into custody. That means that he does not have to speak to investigators without the presence of legal counsel, and he has the right to remain silent to protect against self-incrimination.

The speed with which you hire a lawyer is important in these types of cases, because the longer your son is left alone with investigators, the greater the likelihood that he will say something incriminating.

But your son does have some protection, because anything he says to the police cannot be used against him unless the questioning took place in front of another adult (school counselor, school principal, parent) not affiliated with the police department.

What Are Some Common Criminal Charges Related To a Fistfight?

As mentioned earlier, your son potentially faces a range of criminal charges for being involved in a fistfight, depending on the circumstances.

Why You Need An Experienced Lawyer

A fistfight may seem like a minor ‘boys will be boys’ type of thing, but one punch thrown in anger can cause serious injuries or even kill the person who was hit. But liability depends on the circumstances of the fight, which is why it’s essential that you hire an experienced law firm such as the team at the Law Office of Paul J. Donnelly, P.A. Please call us today at 305-757-3331 to see how we can help mount a defense for your son.